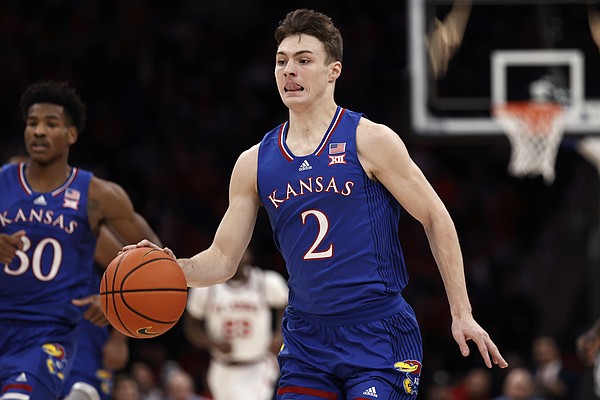 Kansas guard Christian Braun (2) brings the ball up during the first half of the team's NCAA college basketball game against St. John's on Friday, Dec. 3, 2021, in Elmont, N.Y. Kansas won 95-75. (AP Photo/Adam Hunger)

1 – Christian Braun – I’m not sure there are enough words to describe Braun’s career game. But let’s try a few. Tough, tenacious, physical, ferocious, efficient, effective, poised and powerful. In short, he was KU’s best player once again and he continues to show incredible production in every aspect of the game. The 31 points only told half of the story.

2 – Ochai Agbaji – It looked for a while like this was going to be Agbaji’s second starring act on a New York City stage this season. And he was great. Especially early. But on this night, his 23 points made him best supporting actor to Braun’s star.

3 – David McCormack – A double-double with a career-high-tying 13 boards. That’ll work. And the best part was he was pretty poised while doing it.

4 – Remy Martin – Martin looked great when he looked great. Five assists. A few big shots. And that signature energy he brings to the floor. If he could just cut down on the five turnovers that went along with all of that, he’d really have something.

5 – Dajuan Harris Jr. – Nothing special on the stat sheet but steady and solid enough to be out there for 20 minutes. That kind of role is starting to feel right for Harris.

6 – Jalen Wilson – Still looks a little loss and like he might be pressing. But he made up for his 2-of-8 shooting performance with 9 rebounds.

7 – Joseph Yesufu – Played just 9 minutes, but his three assists and zero turnovers made them effective minutes, even if rather quiet.

8 – Mitch Lightfoot – Wasn’t really his night. Fouled a few too many times and didn’t make a ton of plays that affected the game. As a result of both, he played just 6 minutes. His one block, though, did lead directly to four points — technical foul free throws by Braun.

9 – KJ Adams – Went to battle on the glass but didn’t have much to show for it. Still, he’s the type of guy from whom you know what you’ll get. You might not be able to predict the points and rebounds, but you know he’ll work.

10 – Zach Clemence – Four points in four minutes, but with two missed free throws and a little sporadic play. Got thrown out there at the 5 because of foul trouble to McCormack and Lightfoot. Did an admirable job.

12 – Jalen Coleman-Lands – Missed four of the five shots he took and he’s got to start knocking them down or he the misses could make him a rotation casualty. You saw the early stages of that on Friday, as he only played 6 minutes in the win.

Jayhawks react to strong 2nd half in win over St. John’s by KUsports.com