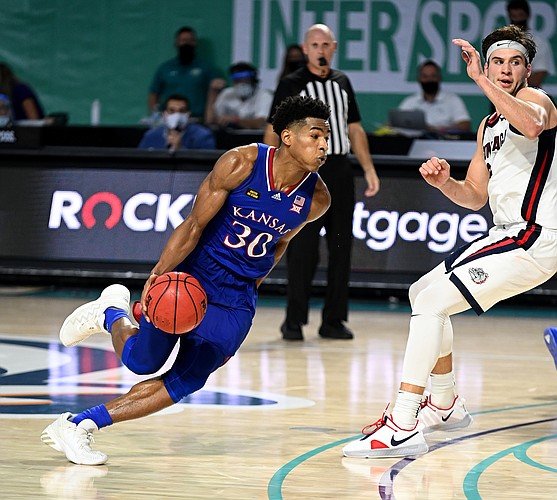 Kansas junior Ochai Agbaji drives past a defender during a game against Gonzaga in the season opener on Thursday. The Bulldogs earned a 102-90 win over the Jayhawks in the third annual Rocket Mortgage Fort Myers Tip-Off on Thanksgiving Day at the Suncoast Credit Union Arena in Fort Myers on Nov. 26, 2020. Photo by Chris Tilley by Photo by Chris Tilley

1 - Ochai Agbaji — Aggressive from the jump and he displayed a smooth jump shot en route to 17 points. Also competed hard on D & got on the floor for extra possessions. KU trailed by just 3 when he checked out with 4 fouls midway through the second half. During the 3+ minutes he sat, the Zags reclaimed control of the game.

2 - Bryce Thompson — Heck of a debut for the 5-star freshman who showed he was not afraid of the bug stage. Tallied 12 points, hit some sweet pull-up jumpers and competed hard for all 28 minutes he was out there.

3 - Marcus Garrett — Clearly Garrett is capable of doing more than he’s done in the past as a scorer. Led Kansas with 22 points on 7-of-9 shooting in a team-high 37 minutes. His focus on scoring though, may have taken him out of his normal role as a facilitator. Finished with just 3 assists to go along with 4 turnovers.

4 - Jalen Wilson — Got the start and, after a slow start, came up big, literally and figuratively. His work on the offensive glass was most encouraging. Finished with 11 points in 22 minutes.

5 - Mitch Lightfoot — His first game back from a redshirt season was as memorable as playing 9 minutes can be. Scored 4 points, grabbed 4 boards and did what he could to provide KU with a rim protector on a day the Zags made 77.3% of their 2-point attempts. His first-half block that was ruled a foul was his biggest highlight and should not have been whistled.

6 - Christian Braun — A quiet day overall, with nothing overwhelmingly positive or negative on his stat line. Competed hard and scored 8 points on 3-of-6 shooting but never really fully affected the game.

7 - David McCormack — Not his day on either end. Still managed decent numbers (8 points, 6 rebounds), but not the kind you’re looking for from a key part of your roster. Played just 20 minutes.

8 - Tristan Enaruna — Scored 5 points in 10 minutes but was not quite as involved as others. That could change if (a) he continues to produce when he’s out there or (b) KU looks to play more 5-guard lineups as it did during two separate stunts on Thursday.

9 - Tyon Grant-Foster — Knocked in a rhythm 3-pointer and had no trouble pulling the trigger. But the talented Juco transfer played just 10 minutes and likely wasn’t quite ready for more than that.

10 - Dajuan Harris — Checked in with around 3 minutes to play and the game well decided. Did not record a stat.

T11 - Latrell Jossell — Got his first college action in 1 minute as both teams cleared their benches.

T11 - Gethro Muscadin — Got his first college action in 1 minute as both teams cleared their benches.