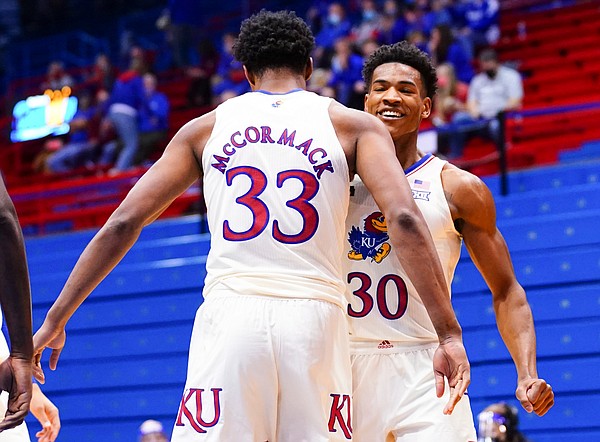 Kansas forward David McCormack (33) throws a chest bump to Kansas guard Ochai Agbaji (30) after a dunk during the second half on Friday, Dec. 11, 2020 at Allen Fieldhouse. by Nick Krug

1 - Ochai Agbaji — Responded to a rough shooting night against Creighton earlier in the week by torching the nets for 18 points in 21 minutes. He made 7 of 10 shots from the floor and 4 of 6 from 3-point range. But the key part of his big night was the fact that he did not force anything. Agbaji looked smooth from the start and took good shots to get the good result.

2 - David McCormack — There was a wide-open missed dunk in there that his teammates will surely clown him for during an upcoming film session. But other than that McCormack did what he was supposed to do in this one. He played big, played through contact and was active on the glass, finishing with 11 points and 11 rebounds in 15 minutes.

3 - Marcus Garrett — Didn’t shoot the ball well but more than made up for it by setting up his teammates for good shots. Garrett finished with 8 assists and 5 rebounds and 2 steals in 20 minutes.

4 - Mitch Lightfoot — When it wasn’t McCormack punishing the Mavericks down low, Lightfoot did his share of damage, scoring a career-high 12 points in the first half alone and adding 7 rebounds and 3 blocks to his stat line in just 14 minutes.

5 - Jalen Wilson — Wilson made so many winning smart and winning plays in this one, but very few of them stood out. The reason? KU didn’t need them to. Still, the early-season star finished with 9 points and 7 rebounds in 17 minutes. Even just a couple of more minutes almost certainly would’ve delivered yet another double-double for the redshirt freshman.

6 - Tyon Grant-Foster — Grabbed 12 points and 7 rebounds in 19 minutes. He’s continuing to show that when he gets extended minutes in a good match up, he can put up serious numbers.

7 - Christian Braun — A pretty quiet night by Braun’s standards. He picked a good night to have one, though, as the Jayhawks did not need much and he was out there during that 17-0 run to open the game and set the tone.

8 - Dajuan Harris — Showed a little shake-and-bake razzle dazzle late in the game and stepped in to take a charge with his team leading by 31 points in the second half.

9 - Bryce Thompson — Played a little sped up at times and did not benefit in any way from the officials swallowing their whistles a couple of times. But he still shot just 1-of-8 from the floor in 21 minutes.

10 - Tristan Enaruna — Got the chance to play some real minutes and had an up-and-down night. Looked aggressive in search of his shot at times, but also turned it over 4 times while finishing with 5 points and 2 rebounds on 2-of-7 shooting in 19 minutes.

11 – Latrell Jossell — Walk-on Chris Teahan got in with nearly 3 minutes to play, but it’s Jossel who continues to light up the nets late in games. Hit his only shot

12 – Gethro Muscadin — Got in near the 8-minute mark and had some good moments, including a rim-rattling dunk. But also looked a step slow and unsure, particularly on defense, surely the result of very little playing time to this point in his career.

You should start writing stats that are not recorded: # of dunks, # of freakin' moving screens, # of layups, # of box-outs, # of jumpshots.