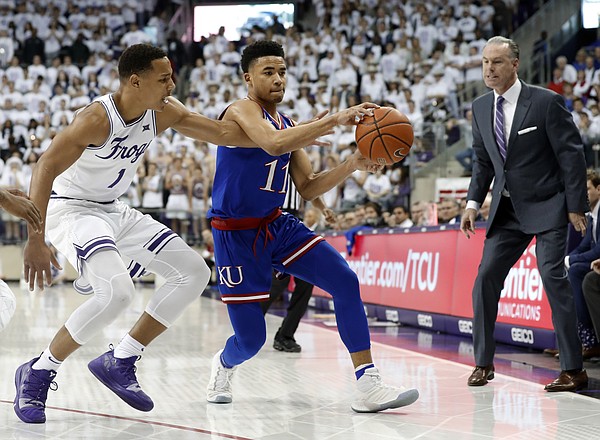 1 – Devon Dotson – Played all 45 minutes of a ruthless game and delivered a career-high 25 points, 10 rebounds and 5 assists to lead KU to a much-needed win on the road.

2 – Ochai Agbaji – His first half set the tone for the Jayhawks to have success and his final numbers were reminiscent of what people have come to expect from the freshman who just keeps soaring – 20 points, 11 rebounds, 41 minutes.

3 – K.J. Lawson – Hit without question the two biggest shots of the game and was ready and willing to play hard and with a good attitude when the Jayhawks had to have him. Finished with 10 points in 16 minutes, but his impact was far greater than those numbers suggest.

4 – Dedric Lawson – It wasn’t his best game by any means, and TCU was not interested in letting that happen again after he hit them for 31 points and 14 rebounds in the first meeting. Still, to grind it out and record yet another double-double of 14 points and 10 rebounds in 35 minutes was absolutely huge for Kansas, which showed it doesn’t have to have Dedric be Superman to win.

5 – Mitch Lightfoot – His energy from that home win over Oklahoma State last weekend carried over to Monday night and the Jayhawks all appear to be catching his drift. Had just 4 points and 6 boards in 22 minutes, but also blocked 3 shots and competed for every second he was on the floor.

6 – Quentin Grimes – Not his night shooting the ball, though he did hit one crucial second-half 3-pointer, but his 4 assists and just 1 turnover in 36 minutes were important on a night when KU needed to take care of the ball to survive.

7 – David McCormack – Made the second start of his career, hit a couple of big free throws and one big shot in the second half and also flashed the kind of ball-screen defense KU fans have become used to seeing from injured big man Udoka Azubuike. This could go down as a big game in McCormack’s development so getting the win was big for that, as well.

8 – Charlie Moore – Missed the 3 shots he attemped and turned it over twice in 13 minutes.

You and Self really won’t give Moore any positives will you. He did have a rebound and an assist. He was not on the floor at all during the collapse of the 12 point lead but was on the floor as the earlier lead built up. He provided a needed 5th body to finish a tight OT. I think Charlie did all right.

I don't think it's a knock on Charlie by any means to say the obvious thing.....he was, by far, the worst player on the floor this game. There are 8 guys, somebody has to be the worst. Charlie was the worst.

Didn't mean he didn't contribute in a couple meaningful ways....he did. But the other guys all contributed a little more.

My knock on Charlie is he doesn't seem to understand his role. When he's in there, he thinks he's the go-to scorer/play maker. He should never be trying to make the kind of play he traveled on coming across the paint--not his game. He needs to be a guy who embraces being a role player. Live for the defensive side of the game. Look for your shot only when it's open, don't force it. He's a good passer--he can make a living off of that. Bill pulled him once for refusing to feed the post. That can't happen. You're a point guard on this team. Pass the ball.

Except the Coach Self says he's not a point guard. He's a small shooting guard. Sort of the ring to our 6-5 point forward, non-shooting guard Garrett. Unfortunately, for some reason Charlie can't find his shot (worse than Garrett & Grimes?). At some point, he will break out. Hopefully, it will be a benefit in one of our games this year.

Having to play Moore so much kills our momentum. I wonder what his plus/minus looks like. I've never seen a guy dribble so much to do nothing. For a supposed 3-point shooter, he sure hasn't shown a propensity to do that with consistency. We're finding out that maybe those numbers he had as a freshman at Cal were more about the weakness of the PAC12 and no so much about how good he was. He's still far superior to me in talent and basketball acumen, so this is just the opinion of someone who hasn't been there and done that......... but he shouldn't be playing meaningful minutes on this team. Ready for Garrett to be back.

Charlie has plenty of ability, just as Grimes does, and has nothing to do with the Pac12's quality. Both are under achieving, but then so was KJ to start the season. For that matter, even Dedric was pretty bad from outside. In the case of the Lawsons, they have continued to work on their game, learned what Coach wants when, and the team has continued to develop with them. The same is true of Moore and Grimes. Their both still working on their game, and will likely have big moments for the team before the end of the season.

Do you forget that Moore was there all last year too..... yet he still doesn't "know his role". I'm not buying that. If we had an even half way decent backup point guard, he'd never see the floor. Grimes is frustrating, but he still grabs boards, dishes assists and plays some defense and he's only a freshman. Moore is now a Junior and just looks out of his league out there and seems to think he's the go to guy when he's on the floor. Apples to oranges.

What history has repeatedly shown is that playing on the practice squad even for a year doesn't teach a player their role. Buy it or not it has repeatedly been the case. Some, such as Dedric, learn quicker than others. KJ is only just learning his. A week or so ago he was in the same situation. There have been plenty others in similar situations in years past.

He should at least know that he doesn't need to be jacking up 3's from 5 feet behind the arc 12 seconds into the shot clock. That part I don't understand. He's been in college basketball for 3 years now, it's not the same no matter how you paint the picture. His role is one thing, common sense is another. When Bill Self looks like he's going to explode after his bone head plays, it's quite obvious Self didn't give him the green light.

Overall C Moore doesn't turn the ball over as often as the other guards. He is a poor shooter and I wish he would only shoot from 15 ft. He passes ok just ok. KJ seems to be playing better with more intensity the same with Lightfoot. I hope the light comes on with McCormack as we really need the big guy. Great night for Dotson, okay night for Grimes, D Lawson. Great and best night of the year for coach.