Lagerald Vick does it again; career-high 33 leads to top spot in ratings 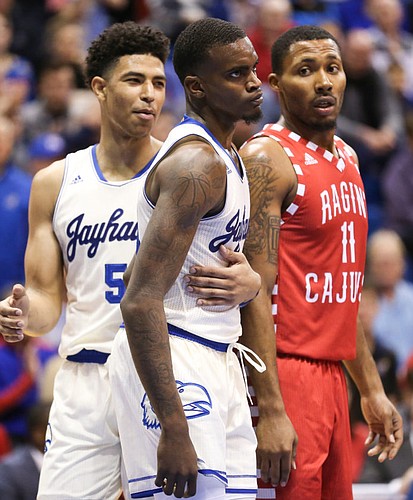 Kansas guard Quentin Grimes (5) holds back Kansas guard Lagerald Vick (24) after Vick was fouled on a drive during the first half, Friday, Nov. 16, 2018 at Allen Fieldhouse. At right is Louisiana forward Jerekius Davis (11). by Nick Krug

1 – Lagerald Vick – Think Vick likes being back in Allen Fieldhouse? Back-to-back games with 30-plus points and without question the heartbeat of the team on Friday night. There’s no telling how these past two games would have gone if Vick had not returned.

2 – Udoka Azubuike – Two first-half fouls took him out of the game for the first 20 minutes, but he responded with a strong second half and let the early mistakes roll off his back. Finished with 17 points and 8 rebounds.

3 – Quentin Grimes – Wasn’t his night shooting the ball, but played good D — read: got back in transition consistently — and got the ball to the right spots and helped KU’s chemistry throughout the game.

4 – Devon Dotson – Jet fast every time he touched it and smart throughout the night. His shot didn’t look great and he only played 20 minutes, but they were high-quality minutes and he appears to be more and more comfortable with every possession.

5 – David McCormack – Gave great energy off the bench in the first half and helped KU avoid serious trouble after falling behind by 12. Missed three of the four shots he took and looked a little sped up on offense, but grabbed six rebounds — four offensive — and brought the exact spark KU needed when he came in.

6 – Marcus Garrett – Nothing special (6 points, 5 assists) but found himself in the right place a lot and played key minutes with a lineup that got KU back in the game in the first half and might not be used again — Moore, Garrett, Vick, Grimes and McCormack.

7 – Dedric Lawson – Lawson did score in this one — two of his points coming from a seated position in the paint after getting his own miss — but he still seemed a bit off and looked to be in his own head. Had to feel good to see the ball go in the basket again, though. Added five rebounds but turned it over four times and was called for three fouls.

8 – Charlie Moore – Played better than his final numbers show, but still missed far too many shots and had a couple defensive lapses. Did provide a veteran presence at the point when KU needed it.

9 – K.J. Lawson – Played just 2 minutes and hit his only shot attempt on a soft jumper from the free throw line. Also added a steal.

10 – Mitch Lightfoot – Had a chance to play big minutes with Azubuike saddled with two first-half fouls, but picked up an odd flagrant foul on a first-half rebound attempt and did not play the rest of the way.

What was the flagrant foul about?

I really hope Garrett use his athleticism to drive. He tends to avoid contacts instead of using his shoulder to make way to the rim. He needs to drive with bounciness a la Wiggins. Gotta use those long arms.

David will be a beast down low once he's able to focus & stay calm. Moore, Garrett should learn how to pass down low to bigs, they need to learn how to pass to bigs off the pick and roll. They seem clueless and need to develop awareness. Seriously, they play like guards who never been trained on those kind of plays. SMH..