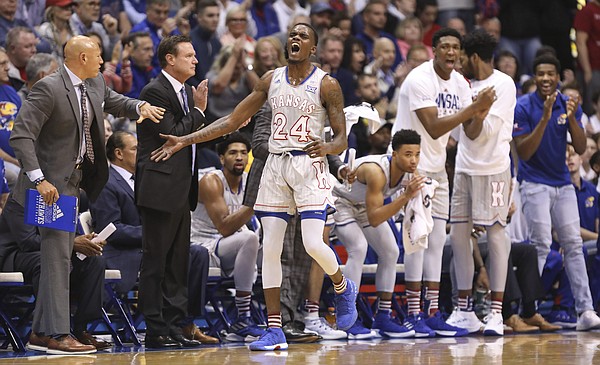 1 – Lagerald Vick – Lights out from the jump, Vick did it all on Monday night, setting a career high with 32 points and knocking in 8-of-8 from 3-point range.

2 – Udoka Azubuike – His energy and effort were so much better than against Michigan State and his stats backed that up. The big fella finished with 23 points and 11 rebounds while, most importantly, managing to play 34 minutes.

3 – Quentin Grimes – Ten assists — many of them to Vick — turned what began as a pretty sloppy start into a stellar performance for the freshman guard who proved he’s more than just a scorer. Added 10 points for good measure.

4 – Devon Dotson – Nothing special but nothing concerning either. Pushed the pace, brought defensive pressure and finished with four points, five rebounds and a couple of steals.

5 – Charlie Moore – Was ready when Dotson got off to a slow start and played the backup point guard role well. Was far from perfect, but did what he needed to do.

6 – Marcus Garrett – He still looks a step off so far this season, like he hasn’t fully figured out what his role on this team is. It’ll come.

7 – Dedric Lawson – As off in this one as he was good in the opener. Only finished ahead of Lightfoot because of his seven rebounds, two assists and one steal in 19 minutes. Otherwise, 0-for-6 from the floor and three turnovers would have landed him by his brother.

8 – Mitch Lightfoot – Ready to fill his role early off the bench but didn’t quite bring anything that stood out. One rebound, one foul, one point, one assist in six minutes.

9 – K.J. Lawson – Played just three minutes and had a charge and a turnover to show for it.

If Dedric's average was 18pts at Memphis, what will his avg be this season with KU? Can Dedric dunk? Can KU coaching staff help him develop his jumping? Wouldn't you want to see him dunking?

Dedric is deceptively athletic. Just plays at such a conservative pace. Let's not forget the posterizing dunk he had against Washburn that got called for a charge. Looked pretty athletic to me. Plenty of guys who have thrived in the NBA without being the most fleet of feet.

He's not deceptively athletic, he tested the worst of anyone in the NBA draft combine 2 years ago. His vertical is like 8" less than Dok's and he was one of the slowest ever tested in the full court sprint.

With that said, he can certainly dunk and no, you can't turn a slow twitch athlete into a fast twitch athlete. That's a genetic change, not a physical one. So he was genetically gifted with great height and long arms but was not gifted with athleticism.

If I were to guess, I'd say he'll average somewhere around 14pts and 10reb but I wouldn't be surprised if both numbers were above that.