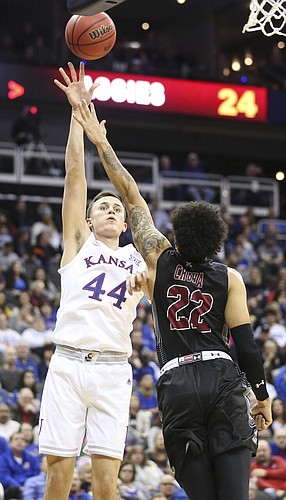 Kansas forward Mitch Lightfoot (44) turns for a shot over New Mexico State forward Eli Chuha (22) during the first half on Saturday, Dec. 8, 2018 at Sprint Center. by Nick Krug

1 – Mitch Lightfoot – So good in so many ways. Aggressively attacked the rim, competed on the glass, brought energy and effort and even took a couple of his signature charges. No chance KU wins this game without him. The guess here is that Self will call him “our best big in the game” during his postgame comments. Seven points, six rebounds and a block in 18 high-quality minutes.

2 – Dedric Lawson – Had every opportunity in the world to own this game and got bumped, pushed or poked too often to take full advantage of it. Scored KU’s final 14 to save his night and the Jayhawks, and, you guessed it, wound up with another double-double... 20 points and 10 rebounds.

3 – Devon Dotson – Not his best game by any means, but he attacked all night and played 39 minutes. Finished with eight points and four rebounds with two assists and three turnovers.

4 – Marcus Garrett – The sophomore was the only Jayhawk who could — or would — score for a good chunk of this game. And Garrett played his typically solid defense, as well.

5 – Charlie Moore – Terrific start, in a starting role no less, and was thrown out there as an answer to sluggish guard play throughout the game.

6 – Lagerald Vick – Didn’t start for a second consecutive game and struggled to get into the game from there. Had some positive moments in the second half — a couple of assists and a couple of important shots — but overall struggled for the second game this week.

7 – Quentin Grimes – After a terrific and aggressive start that netted five of KU's first 10 points, Grimes melted into the floor and disappeared the rest of the way. The freshman did not score another point and also grabbed just one rebound while committing four turnovers.

8 – K.J. Lawson – Had a couple of good moments early, including a 3-pointer in rhythm and an assist to his brother, but played just 4 minutes.

9 – David McCormack – Got his crack but couldn’t do much with it. Still too sped up in a game where KU needed every bit of poise it could muster.

Marcus led the team from beyond the arc. 2-4

Who would have ever thought.

About Self's 'rant' (did he call it scripture or did my ears deceive me?) about joy in playing the game and the mental clutter in the team's head during the post game interview tonight. Is there any kind of meditation/mindfulness training available to the team?