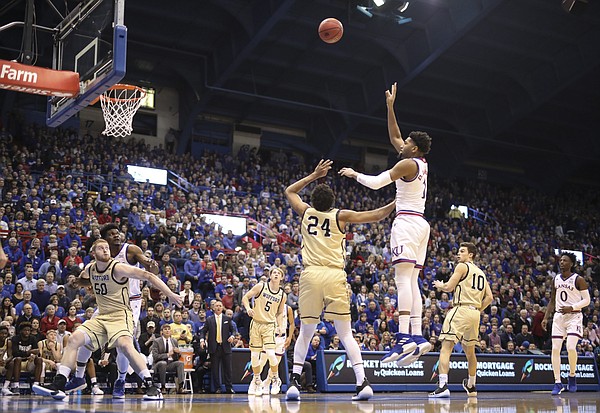 Kansas forward Dedric Lawson (1) turns for a shot over Wofford forward Keve Aluma (24) during the first half on Tuesday, Dec. 4, 2018 at Allen Fieldhouse. by Nick Krug

1 – Dedric Lawson – Was rock solid when the rest of the Jayhawks were still finding their footing and once again flashed that inside-outside game that makes him so deadly. Finished with 20 points and 8 rebounds, coming two boards shy of his fifth double-double in seven games.

2 – Devon Dotson – So many steals, so much speed. His three second-half steals set the stage for KU’s knockout punch. 16 points, 3 assists and 3 steals.

3 – Quentin Grimes – Broke out of his slump in a big way with a 9-0 individual run in the second half and played with a smile the rest of the way. Finished with 14 points on 6-of-10 shooting in 32 minutes.

4 – Marcus Garrett – Started in place of Lagerald Vick and brought the kind of defensive focus that Kansas needed to frustrate Wofford. Finished with 7 points, 7 rebounds, 3 assists and 2 steals.

5 – K.J. Lawson – One of the better players in the first half, particularly as a passer. Tallied five points and three assists in 16 minutes, which included a start in the second half.

6 – David McCormack – Gave key minutes when Azubuike went down and was rewarded with a couple of minutes at the end, as well.

7 – Mitch Lightfoot – Took a charge and hit the glass to try to keep plays alive.

8 – Charlie Moore – Took a couple of bad shots, but helped KU push the pace and made a couple of runners, as well.

10 – Udoka Azubuike – A bit of an incomplete grade here given the ankle injury, but Azubuike wasn’t off to a great start to begin with. Missed his only shot — and hit the ground after the block — and had four rebounds in four minutes.

Another data point leading to an acorrelation between Grimes and Vick. It is kind of nice to know that one will have a good game when the other doesn't, but we really need them both to be clicking for us to be anywhere near successful this year.

Maybe even more important though is just for Vick to get his head back in the game. He started strong last year then mostly faded. He needs to show that he can weather the challenges of a 40 game season if he has any chance of going NBA. Got mouths to feed now.

What outside game? He can shoot from farther than 12 ft. Missed every shot outside 12 ft. except free throws. He has to extend the defense or KU is going to have a lot of issues. Villanova would have beaten last night's team by 20.