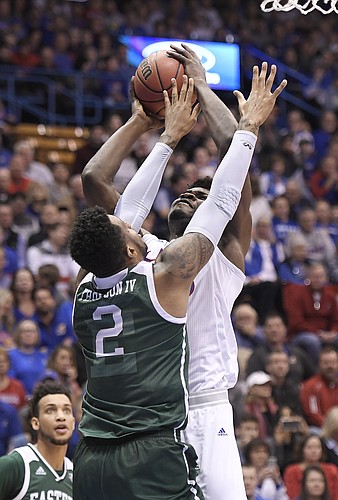 Kansas center Udoka Azubuike was fouled while going up for a shot by Eastern Michigan's James Thompson IV. by Mike Gunnoe

1 – Udoka Azubuike – So strong in his return to the floor after missing four games and most of a fifth with a right ankle injury. After starting in this one, Azubuike used his big body to record 23 points and 9 rebounds in 20 minutes.

2 – Devon Dotson – Did not let a rough ending to his last game carry over into this one. Dotson was solid from start to finish, racking up 15 points, 4 assists and 3 steals in 28 minutes.

3 – Dedric Lawson – Returned to the 4 and immediately started racking up assists again. Not the normal loud night in the points (8) and rebounds (5) departments that we’re used to seeing, but KU didn’t need him to score big to win this one.

4 – Lagerald Vick – Didn’t do anything overly spectacular but didn’t do anything worth groaning about either. A solidly quiet game for the KU senior, who missed all five of his 3-point attempts but dished four assists to make up for it.

5 – Marcus Garrett – As nice of an option as he was in the starting lineup with Azubuike out, KU coach Bill Self has to love seeing him on the bench again, too. Garrett’s such a steady and calming influence when he comes into the game and Self now can sub him for a guard or a forward.

7 – David McCormack – Continues to emerge as a regular option in the rotation. Didn’t play a ton of meaningful minutes (17 overall, but about half that when the game was out of hand), but did play early and was good on the glass.

8 – K.J. Lawson – Still a little quick to pull the trigger on guarded 3-pointers, but gave some decent hustle minutes and hit two triples at the end to go along with 4 rebounds and 3 assists.

9 – Mitch Lightfoot – Played hard but not always with poise. Did a good job of gathering himself and going after his own misses for a couple of second-half buckets. Played as hard as anyone on the floor in the game's final four minutes and had his padded rebounding total (6) to show for it.

10 – Charlie Moore – As many turnovers as points (3) for the majority of the game and opened the game pretty out of control on both ends.