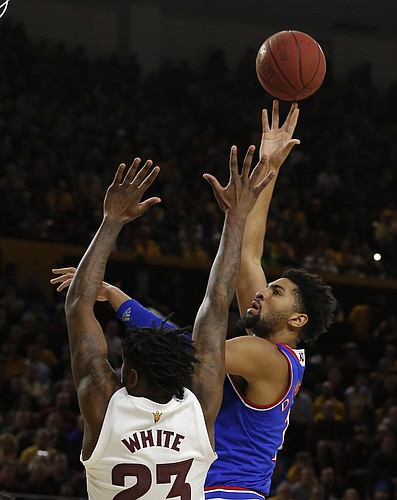 1 – Dedric Lawson – Easy call here. The KU junior was the best player on the floor for either team and it wasn’t particularly close. Monster first half of 18 points and 8 rebounds led to another double-double on a night when KU really needed it.

2 – Lagerald Vick – Came out firing and hit a handful of clutch buckets along the way. His veteran status and experience in games like these no doubt helped keep the Jayhawks calm throughout the night until the very end when it all fell apart.

3 – Devon Dotson – He wasn’t in the same category as Lawson, but close. Any time Dotson wasn’t on the floor, KU looked like a much different team and the KU freshman hit a few big time 3-pointers in this one, as well. Committed five turnovers and had the tough gaffe at the end that cost KU.

4 – Quentin Grimes – This was Grimes’ best game in a while. He still made a bunch of mistakes and misfired on plenty of shots, but he competed and played with the right mentality of attacking whenever possible. Still, KU needs to get more production from him. Simply playing hard or the right way can't be enough.

5 – Marcus Garrett – Made a few mistakes and looked a little overwhelmed at times, but still made plenty of proper plays in key moments, be them attacking the basket, hitting free throws or hounding someone on the defensive end.

6 – David McCormack – Was still sped up at times, but not nearly as much — or as bad — as in his first seven or eight games of the season. Finished with 2 points and 4 rebounds in 11 minutes.

7 – Charlie Moore – Played some pretty big minutes with Dotson fighting foul trouble and ASU freshman Luguentz Dort hounding him. Chipped in 3 points and 2 steals but also turned it over twice in 12 minutes.

8 – Mitch Lightfoot – Brought energy and effort, but never found his flow or rhythm.

9 – K.J. Lawson – Air-mailed a couple of 3-point attempts and had a couple of out-of-position moments that led to fouls.

I was amazed when KJ took back to back 3s at the end of the first half.

I hear what you're saying, but Marcus Garrett continues to be ranked highly in these ratings based almost entirely on his defense. Same for Mitch Lightfoot when he's been ranked high.

Grimes isn't out there for his D and this team needs him to get going offensively for him to make the impact many expected. Because of that, that's where the evaluation goes at the present time.