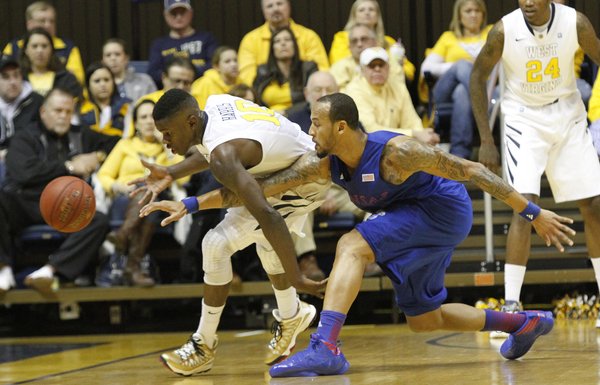 Kansas guard Travis Releford (24) attempts a steal from West Virginia's Eron Harris (10) in the Jayhawks' game against the Mountaineers on Monday night in Morgantown, W.Va. by Mike Yoder

1. Travis Releford: Afterwards, Kansas coach Bill Self called Releford "by far our best player." The senior once again posted an efficient offensive line, tying the team lead with 15 points on 7-for-9 shooting. Self also complimented Releford's defense afterwards, as he held WVU's Eron Harris (11.3 ppg in Big 12 play) to two points on 0-for-5 field-goal shooting. The senior had a pair of crucial plays down the stretch too, hitting a big three from the corner to give KU some breathing room and also pulling down the final defensive rebound of the game following a Jeff Withey block. Releford added four rebounds, two assists and two steals to go with three turnovers in 38 minutes. He now has scored in double figures in 17 straight games.

2. Jeff Withey: A close second behind Releford, the big man had a great shooting night from the floor, making six of eight shots to go with seven rebounds and four blocks. He also came through on WVU's final possession, blocking a pair of shots to make sure the Mountaineers didn't make it a one-possession game. Withey's only struggles came at the free throw line, where he was just 3-for-7. Still a solid night for the senior, who posted an assist and steal to go and two turnovers while avoiding foul trouble in 31 minutes.

3. Ben McLemore: Had two bad turnovers at the end of the first half to let West Virginia back in it and also took himself out of the game early with two quick fouls. Still, you look up and the freshman scores 13 points (3-for-7 shooting, 1-for-3 from three) while also providing the Jayhawks their best free throw shooter (6-for-8). McLemore had four rebounds, one assist and one steal to go with three turnovers in 25 minutes.

4. Elijah Johnson: The senior went 2-for-4 from the floor and 1-for-2 from three to finish with five points while also notching five assists. He had a bad turnover at the end of the first half to let WVU cut the lead to 38-30, but Johnson also was more active defensively, coming away with three steals and five defensive rebounds in 34 minutes.

5. Kevin Young: Self was frustrated with Young for a play late when he tried to make a left-handed pass to the corner while falling out of bounds (the coach said Young should have just shot it), but the senior helped keep a good offensive rebounding team in WVU from getting second chances. Young had seven rebounds (five defensive) and seven points in 32 minutes, adding in an assist and steal with two turnovers.

6. Perry Ellis: Played well in limited action. The freshman scored on a spin move in the first half when KU's offense was going stale, finishing with four points in 11 minutes. Ellis now has posted no turnovers in seven of his last nine games.

7. Naadir Tharpe: Self didn't like Tharpe's defense after the game, saying at one point, the man he was guarding scored eight straight points. The sophomore also took an ill-advised three in the second half during a time when KU would have been better suited to run its offense. Still, Tharpe was robbed of a basket (and also picked up his third foul) on a bad charge call by the officials when he did a nice job of attacking the defense. The point guard finished with no points on 0-for-2 shooting with two rebounds, two assists and a turnover in 15 minutes.

8. Rio Adams: Part of the 2 trillion club: no statistics in two minutes of playing time. 9. Andrew White III: You're probably not getting good bench production if two guys fall below a player in the 2 trillion club. White's shot was off Monday night, as he airballed an open three and finished 0-for-2 from the floor and just 1-for-4 from the free throw line. He also had a turnover, but one positive was that he pulled down four rebounds in six minutes.

10. Jamari Traylor: Had three fouls, one rebound and a turnover in six minutes before getting pulled.

Kevin works harder than anyone and is underrated. Releford will be in the NBA, he just does not know it yet. Let's give these 'Diaper Dandies' some respect. I see great potential in #'s 6-11 and I can't wait for Perry's big game! It is coming soon! Keep working hard, the tourney is coming!

I'm starting to thnk that Rele has a shot at the NBA too as a low-dollar, maximum effort guy who can come in when a teams 2 or 3 has foul trouble and they need somebody to defend the other team's scorer. He probably won't get drafted, but may make it as free agent. I hope he does at least.

Kevin is NOT underrated. If you saw that game on ESPN on Mon. you'd think he was the best player on our team!!!!! Fraschilla & Greenberg always seem to gush endlessly about him. Honestly, among our starters I think Releford's probably the most underrated. Him being in foul trouble on some questionable / bad calls nearly cost us against Temple.

The best thing to say about Rio, White & Traylor is that Tharpe was in basically the same position a year ago. He still has a ways to go - like to his jr yr, but is also light years ahead of where he was as a freshman. It's just phenomonal that they get to learn from 4 Sr's and this staff for a year. It is going to be so fun to see how much thy grow in a year.

good posts by dagger and 512. Lots of potential still in the bench players, and Self is the best coach to get it out of them.

What a treat it i to have 2 human erasors on 1 team. The Block Party is becoming well chronicled, but Travis is doing an amazing job of just eliminating the top scorer from the other team. He's gone. Bye-bye. See you later - or not. Withey is definitely in the running for D-POTY because even a journo can't count blocks, but Travis is probably better. There just isn't a stat that is readily available to post in an article to publicize how good he is.

And then there is his O, which is becoming wonderfully consistent. It's generally not take over the game O, but it is abolutely lethal, a guarenteed killer when open. Fortunately, the team is unselfish enough that the ball is getting the extra pass or 2 to find him wide open so many times. For a G, his FG% is going bonkers.

Releford is playing lights out on both ends. But Aaron Craft is already a lock for DPOTY, remember? Hah, Releford is the best perimeter defender I've ever seen. Ever. And he's so consistent this year. It's really unbelieveable how consistent he's been all season. What an asset to have a 5th year senior like Releford. So glad that he redshirted that second year.

Maybe we should all be thanking Xavier Henry for coming here. Whether fans appreciated his on-court contributions or not, his one year hear is directly responsible for Travis's redshirt.

I agree with everything except EJ being ranked ahead of KY. EJ's bad passes are becoming more and more of a problem, and KY had several big plays, so I think he should have been ranked fourth.

Got to agree with your assessment.

I think that the rankings were good tonight. I felt like EJ played better that what it appeared. He had some bonehead plays but he mostly recovered from them... Also I couldn't tell EJ from Tharpe on the court because of the jerseys. Or White from BMac, or Releford from Ellis! As long as Young and Withey were out there I could at least tell those two apart from everyone else.

I can NEVER tell Releford from Ellis. One of them should start wearing a sleeve or get a single-digit jersey number or something (#24 and #34 now).

I can recommend a terrific ophthalmologist.

Would someone show KY how to shoot a layup!!

Pretty sure he's made a lot of them this year. He's had 16-point outings on nothing BUT layups.

This looks like just a list, but it seems well thought out. I like how Elijah's whole game was mentioned instead of just the bonehead plays he made.

Another win! Let's be happy with that. White really hung in there pulling down those rebounds, that was a tough shooting night.

Maybe Withey should be 2 out of no better option, but how can you not mention his horrific defense on Murray? He let Murray take open 3 after open 3. Great blocks on the last possession but we aren't in that position if he doesn't get torched by Murray in the first half to let WVU back in the game.

You can't ask him to suddenly become a perimeter defender. We did better when we took him off Murray.

Being ranked No. 1 on last night's effort isn't much of an honor, but they have a way of pulling out the win.