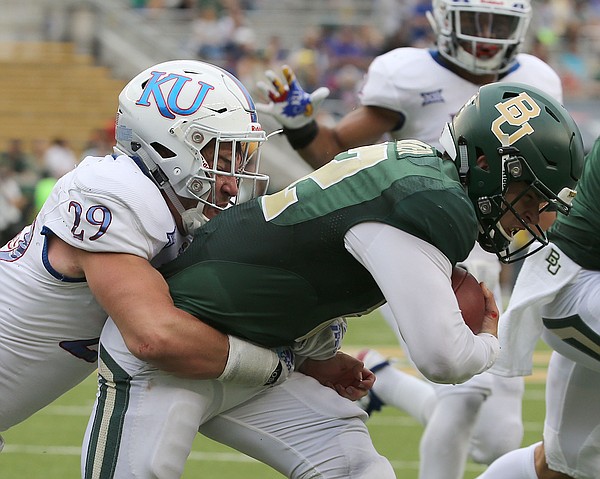 2 - Pooka Williams: Thrown for 14 yards in losses on 14 plays to offset 103 gains for a net total of 89 yards on 14 carries. Busted a 72-yard run to set up KU’s only score. Defense keyed on Pooka and KU’s offensive line gave him very little breathing room. Pass protection not Pooka’s specialty. He might as well go out for a flare pass instead of attempting to block.

4 - Jeremiah Booker: Made himself an easy target for Peyton Bender on a 10-yard fade for KU’s lone score. Booker has two touchdown receptions, tied with Kerr Johnson for team lead.

5 - Bryce Torneden: Eight solo tackles and one assist. Also had one tackle behind the line of scrimmage.

6 - Steven Sims: Gained six yards on a reverse and 47 yards on three receptions, including one for 37 yards.

7 - Keith Loneker: Made five solo tackles and assisted on three others. Also had a pass breakup and a quarterback hurry.

8 - Osaze Ogbebor: Was in on a sack and forced a fumble.

10 - Carter Stanley: The third quarterback used, Stanley rushed for 27 yards on three carries and completed 4 of 6 passes for 37 yards.

They should have pooka slip out of the backfield on pass plays after slight delay. Works in pros all the time. No linebacker can keep up with him in open space