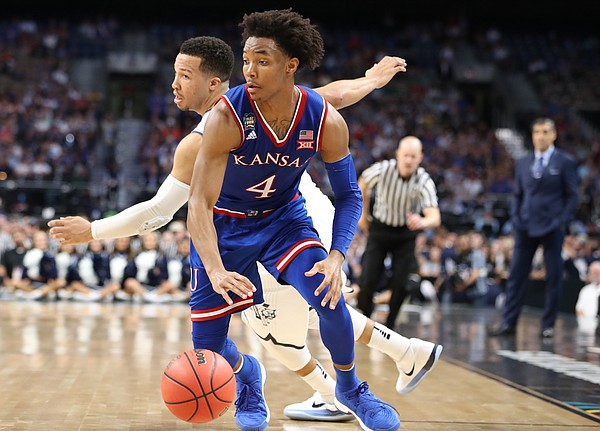 Kansas guard Devonte' Graham (4) steals a ball from Villanova guard Jalen Brunson (1) during the second half, Saturday, March 31, 2018 at the Alamodome in San Antonio, Texas. by Nick Krug

1 - Devonte’ Graham: As was the case two years ago in the Elite Eight, Graham was the team’s best player against Villanova. He scored 23 points, made 4 of 8 3-pointers and had three rebounds, three assists and two steals.

2 - Malik Newman: Had 21 points and eight rebounds. He reached the 20-point milestone in eight postseason games. Made 2 of 5 3-pointers and scored 14 of his 21 points in the second half.

3 - Udoka Azubuike: Stayed out of foul trouble but didn’t have the anticipated impact on the game. Finished with eight points, five rebounds and a blocked shot.

4 - Silvio De Sousa: Had seven points and seven rebounds (six offensive) in 10 minutes off the bench. Made 3 of 4 free throws.

5 - Svi Mykhailiuk: Scoreless in the first half, he finished with 10 points, two rebounds and three assists. .

7 - Marcus Garrett: Outside shot needs complete overhaul. Went 0 for 4 from the field and 0 for 2 from 3. One of his 3-point attempts hit the side of the backboard. Had two rebounds and one assist in 18 scoreless minutes.

8 - Sam Cunliffe: Skied for defensive rebound during two-minute stint at end of game.

9 - Mitch Lightfoot: Two minutes without a stat. Projects as a possible redshirt next season.

In all reality this team actually overachieved. It won the 14th, it won the League Conference, it made it to the final four. Those are big accomplishments. It beat Kentucky and Duke. The one thing about this team that never changed was its inability to intimidate. smallest margin of victory in a long time. Defeats at Allen Field House.

Next year, we will likely go back to Billy-Bully ball, and katie bar the door.