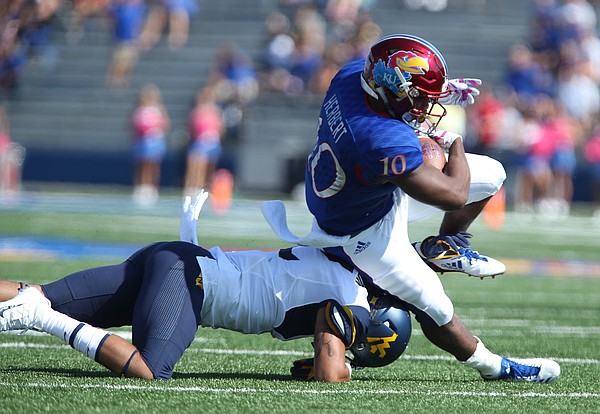 Kansas sophomore running back Khalil Herbert is taken off of his feet by a West Virginia defender during the first quarter on Saturday, Sept. 23, 2017 at Memorial Stadium. by Nick Krug

1 - Khalil Herbert: Speed, balance, strength, tremendous cutting ability. It all adds up to teremendous potential. Yet, he carried the football just three times for 10 yards in the first two weeks, which didn’t add up. He earned more playing time by improving his practice habits. And Saturday at Memorial Stadium he turned in the best rushing performance of any KU running back since Tony Sands (396 yards vs. Missouri), gaining 291 yards on 36 carries with two touchdowns and a long run of 67 yards. The previous week, at Ohio, Herbert rushed for 137 yards and two touchdowns on 19 rushes. He’s averaging 7.6 yards per carry.

2 - Steven Sims: Broke free along the left sideline and Peyton Bender zipped a long one, hitting him right in stride for a 64-yard gain, a beauty at both ends of the play. Also scored on a 7-yard touchdown reception. Finished with six catches for 99 yards.

3 - Hasan Defense: Contributed the best performance by a member of the KU secondary all season. Turned a 50-50 ball into an interception by ripping it away, had a pass breakup and did not a nice job of staying with his man.

4 - Ben Johnson: Was a factor in run game with strong blocking, caught one pass for 23 yards and made himself avaiable on passes that went elsewhere.

5 - Taylor Martin: Threw a beautiful block on a blitzer to enable Peyton Bender to throw his touchdown pass. Also rushed for 59 yards and a touchdown on 19 carries, an average of 5.4 yards per carry. Fell down or might have been able to put himself in position to catch wide-receiver pass from Sims.

7 - Hakeem Adeniji: A lot is put on the true sophomore left tackle and he’s always up to the task.

8 - Mike Lee: Made 10 solo tackles that led to who knows how many extra bags of ice worn after the game by Mountaineers.

9 - Chris Hughes: Might not have been as big a factor in the run game as fellow guard Andru Tovi, but wasn’t penalized as many times.

10 - Joe Dineen: Missed a lot of tackles for second week in a row but also had 11 solo tackles and three assists and made two stops behind the line, plus a quarterback hurry.

The whole game, most of us were wondering why Ben Johnson wasn't getting more passes coming his way.