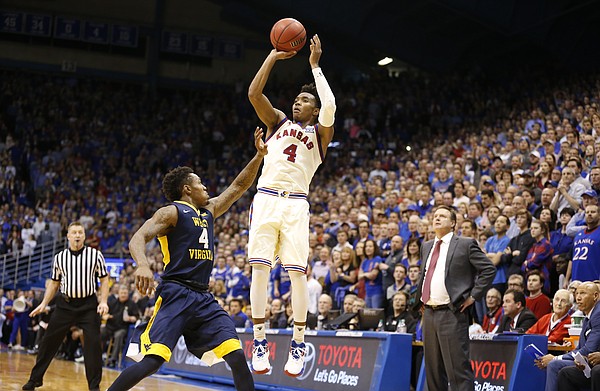 1 - Devonte’ Graham: Scored 14 of his 18 points in the final 6:56, when he made four 3-pointers. Made some terrific dribble moves to free himself for a couple of them. Has made multiple 3-pointers in eight consecutive games. Big night came on one-year anniversary of outplaying Buddy Hield in Norman.

3 - Josh Jackson: Showed such great quickness getting to the rim, only to have his shots bounce out. He had six turnovers, but almost balanced that ledger with five steals. Produced his ninth double-double and fifth in the past six games with 14 points and 11 rebounds.

4 - Landen Lucas: Had a rough night at the free-throw line, making just 2 of 7, dropping his season percentage to .591. But on a night so many teammates missed shots at the rim, his presence came in handy and he slammed home two of the misses. Totaled eight points, 13 rebounds, two blocks and two steals. Had five offensive rebounds. Had a plus-minus of plus-22.

5 - Lagerald Vick: Shot 4 for 4 in a first half in which no other Kansas player made more than one field goal. Finished with 14 points, 10 in the first half, two assists and a steal.

6 - Svi Mykhailiuk: Fouled out in 21 minutes after totaling four points and three rebounds.

8 - Dwight Coleby: Played two minutes, scored on a put-back slam and punctuated it with a glare into the camera.

9 - Carlton Bragg: He fouled out in 18 scoreless minutes and had one rebound. Had a plus-minus of minus-14. Nothing can be said that would not be drowned out by those loud-talking numbers, so we’ll let the numbers do the talking. I'm going to change the subject before I sever my tongue from biting it so hard.

To all the " fans " who started leaving early. Your not allowed in Allen Fieldhouse anymore.

I will not be surprised if Carlton Braggs transfers after this season is over. With the off court issues, his game day progression is severely lacking. He may move back home and play for Cleveland State U. Or, Akron is just a hop skip and a jump away.

Watching him in the McDonald's All American game, I thought that his abilities to shoot the 3 would really open up the High / Low game for the Front Court players. In my opinion, Self seems to have ignored Braggs long range shooting abilities. And, Braggs looks like he's lost and unhappy. Therefore, his off court issues are more of a headline (due to his own poor personal decisions).

Great come back win. One of the craziest games I've seen a Jayhawks team play.

If he was my kid he'd have transferred to Ohio State in December.

I think if we had Az and Lucas down low then we'd see more of Carlton at the stretch 4, however given how thin we are inside Self can't play both Lucas and Carlton for extended periods for risk of getting fouls on both. As a result, Carlton is forced to play the 5, which we can agree is not his natural position as he's not physical enough to battle down low like a standard post player. I've seen people advocate that he should be playing outside more regardless of when he's in there, but if he's the only big on the floor, we can't play 5 out and leave no one in the paint. The floor spacing wouldn't work that way.

All that being said, I don't think this season is lost for Carlton. If he can figure out how to play with effort each time out and contribute 8 ppg and 6 rpg for the rest of the season, without too many defensive lapses, he can be valuable to spell Lucas. If he decides to come back next season, I think he can be valuable as that stretch 4 like Perry with a healthy Az and Preston who have more of the body/temperament to play the post.

Either way, lot of season left and we've proven we can win some crazy games when not playing our best. Should be a fun ride the next several weeks.

Preston is pretty much a Bragg clone. If Bragg does return, Dok (and Coleby) heal completely and Lightfoot puts on a few kilos there should be great front court depth.

KU would be better off with Carlton Banks than Carlton Bragg.

Ok, I'm convinced Bragg is not a 5. He played some at the 4 last night, and still, he didn't take shots, and struggled with rebounds. He and Lightfoot on one WV free throw miss watched the ball go between them while blocking out their guys, whiskey, tango, foxtrot! It looked like a miss communication in a tennis doubles match where the ball goes right up the middle and no one takes it.

I've been watching Self coach since his days at Tulsa. He's never had a player, that I can remember, that slid backwards the way Bragg has this season. I understand he should be playing at the 4, but when he's had that opportunity, there's only been one game where he's actually done much with it. Given the situation with the front court and the play of Svi and Vick (one or the other seems to be hot), I don't see how Bragg is going to get extended minutes at the 4 this season. I'd be surprised if Coach doesn't go back to his more traditional offence next season as the roster changes will make that the more effective option. I hope Bragg sticks it out, keeps his mind focused, and has that break out season next year. He was fun to watch last year, he had energy, spirit, enthusiasm. This year, he just seems disappointed in himself. Maybe it's the pressure to fill Perry's shoes, maybe it was the personal issues, maybe the glass bowls with residue, I don't pretend to know what's in the head of a 21 year old, but something happened that turned that promising season around about when it started.