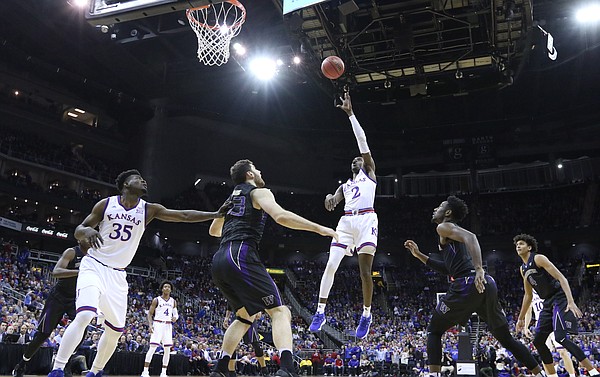 Kansas guard Lagerald Vick (2) puts up a shot in the paint during the first half, Wednesday, Dec. 6, 2017 at Sprint Center. by Nick Krug

1 - Lagerald Vick: Syracuse coach Mike Hopkins picked his poison and the poison he picked was Vick. He gave him the breathing room to operate inside the lane and extended the Washington zone to take away 3-pointers. Vick missed enough shots to make it work. He made 12 of 23 shots, scored 28 points and had five rebounds, seven assists and four turnovers.

2 - Udoka Azubuike: Totaled 10 points, nine rebounds and two blocked shots, but limited himself to seven first-half minutes by picking up two fouls. Had a brief stretch where he brought Kansas back to within one point, but for the most part didn't put his stamp on the game, wasn't aggressive enough on a night that he had opportunities to clean up inside.

3 - Devonte' Graham: Washington lost sight of him just once, when he picked up a loose ball and buried a 3-pointer in the first half, his only points. Made 1 of 8 shots and 1 of 5 3-pointers. He had five assists and could have had more had teammates made shots. He had just one turnover and picked up two steals.

4 - Marcus Garrett: Used his super quick hands to steal the ball and prevent Washington from getting up a shot on its final first-half possession. It was one of his three steals to go with two points, five rebounds, two assists and two turnovers.

6 - Svi Mykhailiuk: Made just 2 of 8 3-pointers and finished with eight points, four assists and three turnovers. Not a good rebounder for his size, he had just two boards.

7 - Malik Newman: Not fitting in yet. Looks to make scoring plays when the right play is to keep the ball moving by passing it. Had just two points heading into game's final minute and finished with eight by hitting a pair of 3-pointers.

I am surprised anyone got top ranking... The whole team was sleep walking through the game. Yes Vick scored, but how many did he miss from 4 to 5 feet from the basket. Some of the fouls that Washington received I couldn't see even when I replayed it a few times. We were lucky we didn't loose by more. Maybe this will get the attention of the team and they will learn that anyone can beat them when they don't give 100%

Washington was hitting their shots and our Jayhawks were not. Vick should have scored 50 points if he would have been aggressive and they passed him the ball. Even open sometimes he didn't shoot. Well Self calls the zone crappy but sometimes it works. Even Duke uses it but Self hates it.

In a weird way, it was our defense that beat us, because when you're shots aren't going in, you have to hang your hat on it. How many times did Washington drive all the way to the basket.

Larry Brown had it right. Every once in a while, you try to take the charge, because physicality makes people think about driving all the way. We just simply say "ole" and let em go by.

I think the strategy for beating us is clear. Run us off the 3 point shot, is a must, then hope we aren't making the rest of our shots, and we're playing mediocre defense, and voila.

I also thought I saw a lot of selfishness, no pun intended, people were open and they were not getting the ball. Also, Svi, and Newman, should have drive in to the free throw line,and taken some shots from there.

Don't worry, we'll see some more zone before the season is over.

Numbers (and copy-edits) are hard, amirite?!?

Poor defensive effort must have made Bill Self feel sick.