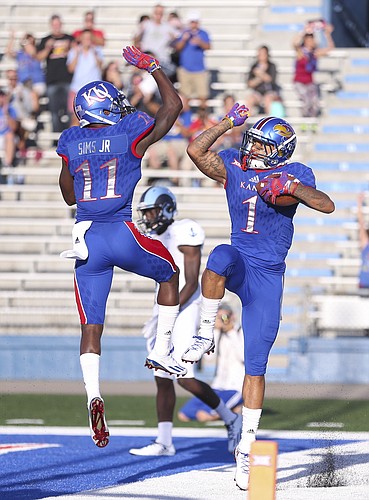 1. Steven Sims Jr. – The sophomore receiver showed off his speed in a big way in this one, leading Kansas with 124 yards receiving to go along with five receptions and two touchdowns. Sims also was the second most targeted Jayhawk in the game.

2. Daniel Wise – Led the team in tackles with five (including four solo) and was a monster early on when the Kansas defense set the tone. Also added two QB hurries and played a major role in one KU takeaway.

3. Montell Cozart – If not for one bad decision, which Cozart said he regretted the minute he let the ball go, the junior quarterback probably would’ve been No. 1 in these rankings. He finished 18-of-25 for 199 yards and 3 TDs and looked crisp, confident and in complete control most of the night.

4. LaQuvionte Gonzalez – Showed up early and finished as KU’s leading receiver with seven receptions on nine targets. Finished with 78 yards and one touchdown that showed off his athleticism, coming back to an under-thrown ball and plucking it away from a defender.

7. Tyler Patrick – Somewhat quietly finished with 51 yards and a touchdown on five receptions while being targeted six times. Patrick continues to show steady progress and sure hands, which make him one of the most reliable wideouts on this roster.

8. Bazie Bates IV – Four tackles, one for loss, one pass break-up and one all-instinct-and-athleticism interception made for a great night for a player who struggled early last season but came on late and appears to have picked up right where he left off.

Happy for these guys and the team. Well done men!

"Cozart said he regretted the minute he let the ball go"

You'd rather have lots of hasty, inaccurate throws?

And you think a quick release = inaccuracy?