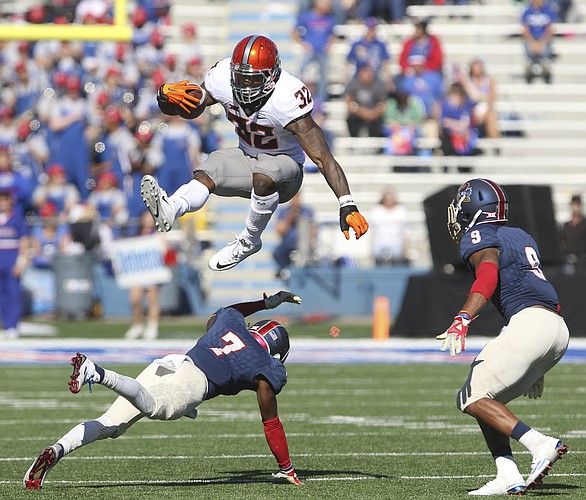 1 - Fish Smithson: Strip-sack and fumble recovery that preceded the game’s first touchdown. Was out of position on OSU’s final touchdown, but overall had a productive day with 16 tackles, 14 solos.

2 - Ke’aun Kinner: Lost a fumble and team’s momentum went with it, but other than that looked as good as he ever has, rushing for 145 yards on 14 carries.

3 - Daniel Wise: He commands a lot of attention from the offensive line and still manages to get into the backfield. Had four tackles, a sack and a quarterback hurry.

4 - Dorance Armstrong: Two of his four tackles came behind the line of scrimmage, including a sack, his seventh of the year.

5 - LaQuvionte Gonzalez: Cost offense 27 yards of field position in second quarter when he picked up a kickoff, instead of letting the football dribble out of bounds. Also didn’t quite adjust to a pass perfeclty and it bounced off his hands and into the hands of an Oklahoma State defender. But he also showed off his tremendous speed on a 68-yard touchdown on a fly pattern. Caught six passes for 106 yards.

6 - Steven Sims: Sometimes getting stronger results in an athlete gaining speed and that has been the case with Sims, who burned his way to 90 yards on nine receptions and is having a very productive sophomore season.

7 - DeeIsaac Davis: Exploded off the line of scrimmage for one of KU’s five sacks and had five tackles. Good player.

8 - Mike Lee: Hard hitter had nine solo tackles and a pass break-up in the end zone when he rocked the target into letting go of the football.

9 - Joe Gibson: Had some nice down-field blocks and led an offensive line that had its best performance of the season before he left game with an injury.

10 - Montell Cozart: Benched for two games while Ryan Willis took his turn at trying to juice the stagnant Kansas offense, Cozart did more good things than bad in his return to the lineup. Had the hot hand early and cooled down, finishing with 24 completions on 40 passes for 250 yards. Head coach David Beaty said his two interceptions were not his fault. Might be over habit of overthrowing long passes.

Mike Lee was the best performer on the field. Not even close. I think that Tom has quit watching the games.

And Q? He doesn't use his hands to catch a guaranteed T.D. and he's in the top ten?

My goodness. The bar has been lowered, or we have entered an alternate universe.

Fish and then Mike Lee. Lee is for real (and a true freshman who could be playing in high school this year if not for reclassifying). He could be the next KU DB to make an impact at the next level. It was clear from the game that the defensive line is a weakness and the DBs the strength. Most of the five sacks were coverage sacks. The OSU QB had all day to make his 3rd and 4th reads. The pressure without blitzing is nonexistent. The greatest improvement in the defense is clearly the DBs and Tom has three lineman listed ahead of Lee and the other defensive backs.

Or is it Matt Tait posting for Keegan?

I just posted the content. It's Keegan's rankings and I forgot to change the "posted by" section. Sorry for the confusion.

I would place Montell higher than 10 just for not turning the ball over and not getting sacked. I stated earlier in the season that no one respected his arm beyond 30 yards. I gladly stand corrected and offer my apologies to Montell.