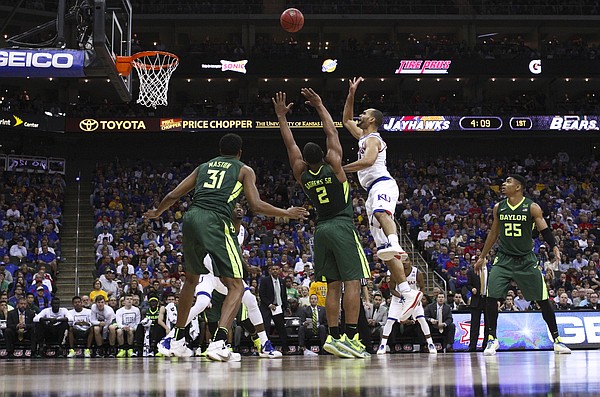 Kansas forward Perry Ellis (34) puts up a floater over Baylor forward Rico Gathers (2) during the first half, Friday, March 11, 2016 at Sprint Center in Kansas City, Mo. by Nick Krug

2 - Wayne Selden Jr.: He made a nice poster with a high-flying one-handed jam over Ishmail Wainright. Selden also played such strong defense that his second consecutive 0-for-3-from-three night was beside the point on an 11-point night.

3 - Devonté Graham: Made many confident passes on the fly, most notably a lob from long distance thrown down by Carlton Bragg. Graham’s really pushing the pace, cranking up the energy at both ends. He totaled 14 points (3 of 7 threes), eight assists, four rebounds and four steals in 38 minutes.

4 - Frank Mason III: Another very efficient game for the junior guard resulted in nine points, six rebounds, three assists and a steal. He made 4 of 6 shots and 1 of 2 three-pointers.

5 - Carlton Bragg: He had just one double-figures scoring output in the regular season and now has three. Has scored 22 points in 21 minutes and has committed nine fouls. Bragg did not have a rebound against Kansas State and had seven against Baylor.

6 - Jamari Traylor: Scored just one point and had trouble holding onto the ball, but still managed six rebounds and lent strong defense (one steal one block) in 19 minutes.

7 - Landen Lucas: Baylor has high-flying, quick athletes making things happen near the rim, so the Bears aren’t the best matchup for Lucas. Still, he contributed seven rebounds, a blocked shot and three steals on a night he didn’t attempt a field goal and made just 1 of 4 shots from the line.

8 - Hunter Mickelson: Made both free throws.

9 - Svi Mykhailiuk: Turned it over three times and committed three fouls in 10 minutes.

11 - Cheick Diallo: Played one minute and committed two fouls during the late implosion. His handlers won’t like hearing this: NBA scouts are unimpressed.

12 - Lagerald Vick: Committed a foul in one minute during the late collapse.

Graham is having a breakout year. Dare I say Graham > Mason?

More importantly, we are at the point where this is a legit debate. Gotta love that. If they continue to outdo each in the postseason things are looking good.