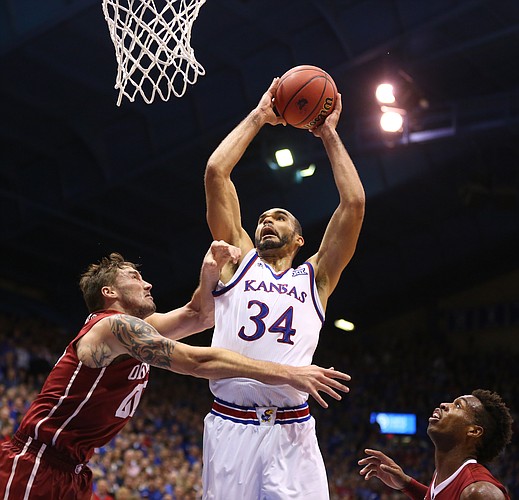 Kansas forward Perry Ellis (34) gets fouled by Oklahoma forward Ryan Spangler (00) on his way to the bucket during the second half, Monday, Jan. 4, 2016 at Allen Fieldhouse. by Nick Krug

1 - Perry Ellis: Played 53 minutes, most of it in the paint, and never backed down from contact. Opened the game on a tear and had another scoring binge late before running out of gas. Totaled 27 points, 13 rebounds, three assists and just one turnover. Made 2 of 3 three-pointers and had a nice variety of hook shots that found the bottom of the net.

2 - Frank Mason: Also played 53 minutes and saved his best for the last 12 seconds. Deflected the inbounds pass from Buddy Hield at that point of the game, chased down the loose ball and a couple of dribble moves later was on his way for an uncontested layup when Hield fouled him with nine seconds left. Made both free throws for the game’s final points. Perhaps from exhaustion from chasing around Hield for the second half and all three overtime periods, Mason made just 5 of 20 shots from the field.

3 - Wayne Selden: Made some huge shots in the clutch and played 43 minutes without turning it over once. Made 9 of 17 shots and 3 of 7 three-pointers.

4 - Devonte Graham: Looked younger, less ready for the big stage than most of the players on the floor in the first half. He sure grew up in a hurry after intermission.

5 - Jamari Traylor: Played a terrific second half, showing fire at times when teammates were dragging. Used explosive jumping ability to stop Oklahoma from scoring at the hoop. Had three blocked shots, made all three field-goal attempts and had three rebounds in 15 minutes.

6 - Landen Lucas: Shook off a poor first half to make huge play after huge play in the overtime periods. Made 5 of 6 free throws, had a huge tip-in, and finished with seven points, eight rebounds and a blocked shot.

7 - Brannen Greene: Made 2 of 3 three-pointers, had two assists and a steal and had five defensive rebounds. Showing better effort defensively but still spaces out here and there at that end of the floor.

8 - Svi Mykhailiuk: Hit a three from the right corner, but also committed three fouls in six minutes. Didn’t look as quick as the players he guarded.

9 - Hunter Mickelson: Scored team’s first bucket on a short-corner jumper but didn’t score again and totaled nine minutes of action. Two of his three rebounds came off the offensive boards.

10 - Carlton Bragg: One day, he’ll thrive in a game of skill and will such as this one, but that day isn’t here yet.

11 - Cheick Diallo: Not quite ready for a game against a team with such experienced players.

Don't think I've ever agreed with you more than this - top to bottom.

Perry also got the strip on the 2nd to last 3 attempt, yes.

It's scary to think of what Buddy might have done if Frank wasn't inside his jersey for the last 35 minutes of the game. Mostly scary because it wouldn't have been 35 minutes.

Frank's defense was monumental. I like the fact that Frank asked for the assignment in the second half. Leadership anyone?