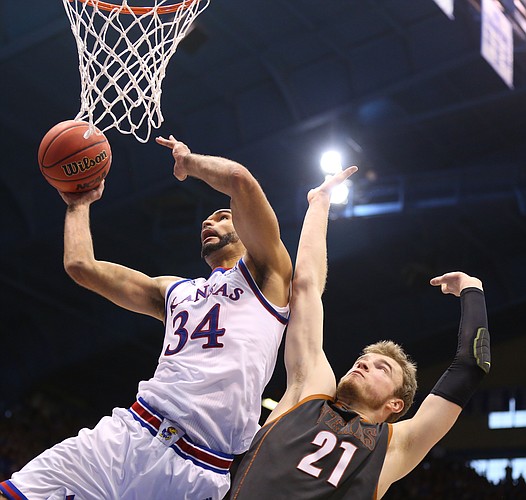 Kansas forward Perry Ellis (34) bangs inside for a shot and a foul from Texas forward Connor Lammert (21) during the second half, Saturday, Jan. 23, 2016 at Allen Fieldhouse. by Nick Krug

1 - Perry Ellis: Perimeter jumper looks better than ever, which opens up everything him. Not many players who guard him will have quickness to stay with him when he pump-fakes and drives around the them. Made 9 of 15 shots for a game-high 26 points. Used quickness to pick up three offensive rebounds.

2 - Devonte' Graham: Hit huge shots at crucial times and turned 5 of 10 shooting and 3 of 6 three-point shooting into a 14-point game. Also had six assists and three rebounds.

3 - Wayne Selden: Caught fire from long distance in the second half and scored 11 of his 19 points after intermission. Made 4 of 8 three-pointers.

4 - Frank Mason: Couldn’t get his shots to fall (3 of 14), but lent physical defense at times and picked up eight rebounds and three assists and had just one turnover.

5 - Landen Lucas: His statistical line had a Dennis Rodman look to it: Zero points, 10 rebounds, six offensive boards. He started, played 23 minutes and was whistled for four personal fouls.

6 - Jamari Traylor: Immediately had positive impact on game that was headed the other way in a hurry when he checked into the game. He lent physical defense without being whistled for a foul and had two points, five rebounds and two assists in 15 minutes.

7 - Carlton Bragg: Knocked down another mid-range jumper shortly after checking into the game. Played five minutes and blocked a shot.

8 - Brannen Greene: Great hustle play: Knocked ball loose from Isaiah Taylor at top of key, joined the race for the ball at the other end and went to the floor for it. His foot was out of bounds, so KU never gained possession, but the play received an ovation from coach Bill Self. Went 0 for 2 from three.

In Self I trust, but I'd sure like to see more Mickelson. I feel he has the best balance of offense and defense. Lucas has no offense or confidence shooting the ball. Traylor is too small on both ends and Diallo is too raw. Just my opinion.

An average Texas team in AFH - not too much to get excited about.

Tellingly, in our toughest two games of the year (vs. OU and @WVU), Perry led the team.

Sorry Devonte, I would have rated you much lower, again your dribble drive defense sucked.

Sorry Devonte, I would have rated you much lower, again your dribble drive defense sucked. Also, I have to admit Lucas, after he missed easy basket, played better than I expected. I, also, prefer Mickelson.

My speculation is that Selden and Graham doesn't like Mickelson, and they informed Self that at their meeting. I could be way off about this, but that's what I'm toeing together given the events.

Whether they like him or not, Mick provides us the best chances at getting to the final four.

That seems very unlikely. Even if it were true I don't think any head coach is going to let his team dictate the lineup.

Brannen's play resulted in them throwing the ball out of bounds with 1 second on the shot clock, so in a way we did gain possession. It just took a couple extra ticks. The time spent chasing the ball down the court was crucial to the D-stop.

Jamari is knock down a couple spots in my book because after getting beat while pressing in the back court, he loafed down the court while Taylor lob a dunk up for Ibeh. Granted it was Taylor, who is going to be faster than most people on the court, but the lack of effort on the part of Traylor when he did get in the game is really disappointing. Maybe it's just because it seemed to be the downside of the team's play lately.

Definitely wish we could see more of Hunter, especially when Perry sits (if we're not going to play Carlton). An O with Landon and Jamari in the front court is an O with a black hole of production.

Was really surprised to see Diallo get a DNP. Even he provides more O possibilities than L&J combined.

I agree with Dirk's Diallo comment. I would have loved to have him there, even for a few minutes.

During the game I kept saying we need a scoring threat at the 5 to keep the interior D from collapsing so much on drives. I think Bragg is the best option in that standpoint. However looking back at the last three games, we lost 2 because of poor D help on picks/ screens, defensive rebounding, poor screens/picks on O, and awful FT shooting. Lucas is clearly the best provider at the position in 3 out of 4 of these criteria. After reading the stories on team meetings, it's pretty clear the guards feel strongly that Lucas is most trustworthy D rebounder and help on picks/ screens.

This team has a longggggg ways to go. It appears to me that after the Big Monday win over Oklahoma, the team went into street ball mode. Undisciplined since the OU game. Yesterday's 2nd half looked like they finally made the decision to actually try and play some disciplined style of basketball.

We will see. This is simply last year's team, just a little older.