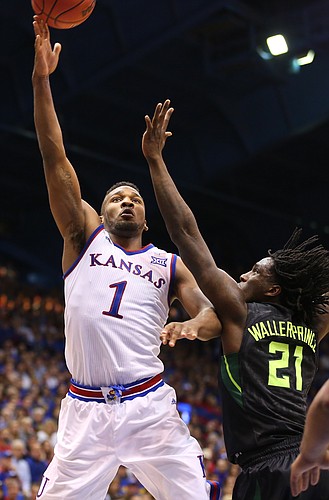 Kansas guard Wayne Selden Jr. (1) hangs for a shot against Baylor forward Taurean Prince (21) during the second half, Saturday, Jan. 2, 2016 at Allen Fieldhouse. by Nick Krug

1 - Wayne Selden Jr.: Made his first seven shots on four three-pointers, two drives and one stop-and-pop, mid-range jumper. Had 18 of his 24 points in the first half. Made 5 of 6 three-point shots.

2 - Devonté Graham: Came out on fire and never stopped hustling. Made 6 of 8 shots, 2 of 4 threes and contributed 15 points, four assists and three steals, without turning it over.

3 - Perry Ellis: For the second game in a row he came out for the second half in super-aggressive mode and made key plays. Showed his wide array of scoring methods on his way to a 17-point, six-rebound, three-assist day in 24 minutes of action. Looks so natural shooting threes now and has made 9 of 17, including 1 of 2 Saturday.

4 - Frank Mason III: Shook off a so-so first half and took over for a stretch when Kansas needed to put more cushion on its lead. Had 11 points, five rebounds and four assists.

5 - Hunter Mickelson: If two of his blocked shots had not wrongly been whistled as personal fouls, his line would have read seven points, six rebounds, five blocked shots. Is giving opposing drivers something to think about before they enter the lane.

6 - Brannen Greene: Left in the final minutes, clutching his right thumb in serious pain. As has been the case lately, looked to drive more often and hustled defensively. Had eight points, three boards and a steal.

7 - Carlton Bragg: Looked a little more comfortable and produced six points and three rebounds in 10 minutes. Knocked down a three.

9 - Svi Mykhailiuk: Was aggressive enough to make five free throws in four minutes of action and picked up a rebound.

10 -Lagerald Vick: For the second game in a row, Vick hit a three-pointer at the end of the game.

11 - Jamari Traylor: Emphatic blocked shot of a Lester Medford drive threw a charge into the crowd and was the highlight of his day that included two assists and four personal fouls in 10 scoreless minutes without a rebound.

'Mari seemed to bait Medford into driving for the layup himself. Sort of loafed off him just a bit. Just long enough to get him to commit to the drive vs. the dish, then the explosive attack the last couple steps prior to the block. Sweet, sweet, heady play. Loved it.

Seemed like a bit of a disservice for the announcers to call him a senior. Especially considering his background here and in Chicago, there is no one that deserves to be referred to as "the graduate" more than 'Mari.

Bill's talk about short rotations makes sense this time. The five starters separated themselves and made this harder than it looked victory possible.

Seriously, as great as Wayne was, I think Devonte deserved first for this game.