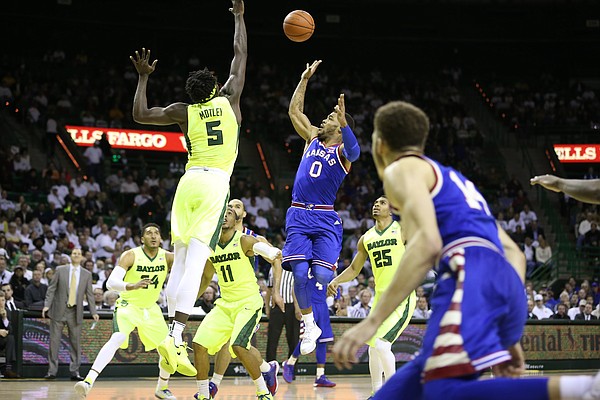 1 - Frank Mason III: Runners, teardrops, floaters, whatever you prefer to call them, Mason was making them. The junior guard shot 7-for-11 at Baylor, and made two of his four attempts from three-point range, while adding four rebounds, three assists and a steal in 37 minutes. Bill Self rightfully called Mason “a pit bull,” and KU’s MVP in the win.

2 - Devonté Graham: Hit a big three-pointer late, had seven assists and just two turnovers, and made 3 of 7 shots, all three-pointers.

4 - Wayne Selden Jr.: Best player on the floor for the final few minutes. In the final 2:25 he picked up two offensive rebounds and scored four of his six points. Played a great defensive job all night against Taurean Prince (4 of 13).

5 - Landen Lucas: Huge steal with score tied at 55-55 and then scored on a put-back at other end with three minutes left. Followed it up with a defensive rebound. Picked up five of his 10 rebounds and 3 of his 5 points in the final 4:52. Rough, rough game until he played great down the stretch. For much of the night, Baylor front court players used superior quickness and explosiveness to beat him to rebounds. Bears dared him to shoot and he made just 2 of 6. After shooting an air-ball from the baseline, he passed up wide-open shots. That he could finish in such dominant fashion after playing so poorly much of the night is a testament to his toughness and maturity. He has plenty of both.

6 - Jamari Traylor: Turned it over twice, but also had a blocked shot, a steal, four points and a rebound. Committed four fouls in 12 minutes.

7 - Svi Mykhailiuk: Played nine minutes, made a couple of nice passes and finished with three points and an assist. Made one of two three-pointers, both good shots.

8 - Brannen Greene:  Made one of two shots, and hit a three-pointer, but played just seven minutes.

9 - Cheick Diallo:  Blocked a shot, committed a foul and turned it over in two minutes of action.

10 - Carlton Bragg:  Couldn’t finish in-bounds play that resulted with him with ball under hoop after cutting to the hoop.

Frank was THE MAN last night.

Any shot that includes a virtual decapitation should be called a teardrop but that seems inappropriate for the pit bull.