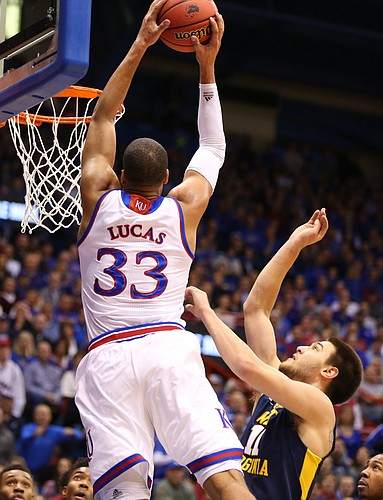 Kansas forward Landen Lucas (33) gets up for a lob dunk over West Virginia forward Nathan Adrian (11) during the first half, Tuesday, Jan. 9, 2016 at Allen Fieldhouse. by Nick Krug

1 - Landen Lucas: He picked a good time to have a career night, because without a rugged defensive rebounder hanging tough nobody is going to beat West Virginia. Lucas totaled nine points, 16 rebounds and four blocked shots, the latter two totals career highs. He made 4 of 5 field goals and has been finishing better of late.

3 - Frank Mason III: Appeared to have the spring back in his step and he used it to produce 14 points, five rebounds and a steal. He has not been as consistent this season, perhaps because he battles so many bumps and bruises, but his point total is remarkably consistent. He has come out of the past 15 games with a season scoring average that never has been below 13 points and never higher than 13.4 points.

4 - Brannen Greene: He burst out of the doghouse with 10 points and four defensive rebounds in 16 active minutes. Made 2 of 3 three-pointers. Fired up the crowd.

5 - Devonté Graham: He ran into some traps and turned it over five times, but it’s more difficult to take care of the ball against West Virginia than any team in the country. He also buried 2 of 4 three-point shots and had four rebounds and four assists to go with 10 points in 38 minutes. Made sure Kansas pushed the pace from the outset.

6 - Wayne Selden Jr.: Woofing in the face of an opponent right next to a referee after scoring a bucket drew him a technical, his second foul of the first half. Played well defensively and made some nice passes en route to 11-point, two-assist effort.

7 - Cheick Diallo: Had an active two-minute stretch in the first half and picked up an offensive rebound and a personal foul.

10 - Carlton Bragg: Played one minute and committed a foul.

This is the Lucas we need. The points came when he went straight to the basket and hustled. We need somebody to rebound like that every night. If he can keep the other teams off the boards then this team can do some serious damage.

It appeared to me that both Graham and Mason would wait in the back court for WV to come and trap them, often in a corner where they had to contend with the sidelines. Why not bring the ball up court as quickly as possible and avoid the problems in the backcourt?

Yes I was literally screaming at the tv over how we let them set up the press while we walked to the ball then looked panicked bringing it up. Stupid. Beat the press with speed not slowing down the ball

On the other hand great game and way to finish.

On another note Coach Self was more positive than normal during timeouts. Rather than barking at his players for mistakes he didn't have to jerk a player out for his first mistake. I'm a believer that compliments work better than criticism. Maybe the whipping boy Greene won't have to look back at the bench should he pull a blunder.

The whole team looks so much more engaged (and aggressive) when Self uses a 10 man rotation unlike the 8 man used during the "slump."

I agree Gregor, I have said all along that we need to use our depth to wear down other teams, OU, Baylor, Iowa St are not deep teams and even if its just for a few minutes at a time use our bench, give the starters a little bit of a break, push the tempo and wear other teams down, that's what Wvu dies. I like us pressing to begin the game, it seems to get the guys involved early and we haven't been starting the game so sluggish like we did during the slump.

If you were watching the replay on the TV broadcast, Wayne Selden was clearly responding to something his defender said when he got his technical. His head quickly snaps in reaction in the guy's direction and he has a MAD look on his face. He wasn't just bragging after the basket. That should've been a double technical, but the official only say Selden's part of it.