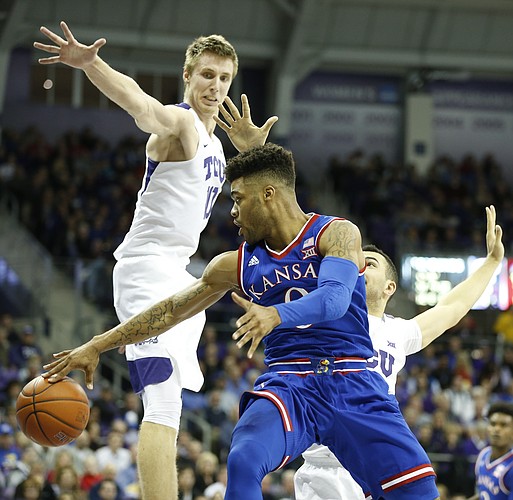 1 - Frank Mason: Made some tough, tough shots, including one when double-teamed by a pair of tall defenders. Produced 22 points and seven assists with just one turnover and he added two steals and four rebounds. Came up with several big buckets to curb TCU's enthusiasm. Defensively, it wasn't his best effort in stopping penetration, but he was the best offensive player on the floor and played 35 minutes.

2 - Landen Lucas: Made 7 of 9 field goals and totaled 15 points and a career-high 17 rebounds. Seven of his rebounds came at the offensive end.

3 - Lagerald Vick: Effective driving and shooting from behind the 3-point arc (3 of 6) and scored 17 points.

4 - Svi Mykhailiuk: Had some sloppy turnovers and defensive lapses early, but finished with 12 points in 37 minutes and made 3 of 5 3-pointers.

5 - Devonte' Graham: Had six assists and just one turnover, but made just 1 of 7 3-pointers and 3 of 14 field goals. Also had trouble stopping dribble penetration.

6 - Carlton Bragg: Missed a couple of shots in close, but did a nice job on the boards with nine rebounds in 16 minutes.

7 - Josh Jackson: Fouled out in 12 minutes and one of them came on a technical foul after he was whistled for a foul on a questionable call. Threw up airballs on drives and had his poorest night as a Jayhawk.

The easy way to tell that Frank deserved the one-rank tonight is how we looked without him in the game. Devonte is disappearing a little right now. We need him back in his old Alfa mode. He'll get there.

Seven deep and we will be beat up pretty quick. Hope we can get some PT for Dwight and Mitch. It is amazing how much more intense it gets in conference. That was a good team at home we beat and 10 players deep. Vick and Bragg out scored and out rebounded their second 5. And we needed all of it.

While Frank had a typically solid game, Landen was spectacular. Not even close call. Landen No. 1 last night. Without him we lose.

Exactly, only reason I clicked on the article was to say the same thing. It feels like it has a chance of being a replay of last year for Landen.

I couldn't agree more. Even the announcers said that Landen was the MVP of the game.

I also think Carlton should have been ranged higher, as he had some big rebounds in the early going.

Typical & solid would be appropriate for Landen, but not Frank. Landen played a great game, but that's just catching up to Frank.

It was the same, but a notch or 2 lower for Devonte and Carlton. Graham did not have a good game at all, but it was still slightly better than Bragg

Self is very predictable, when the Big XII rolls around his bench gets very short. He had meantioned allowing Lightfoot to play through mistakes. Don't think there will be many games the rest of the season that will not be highly contested (the worst teams might be Texas and Oklahoma and they are not patsies), so unless fouls or injuries become an issue, these 7 will likely play the vast majority of minutes.

Even with fouls and injuries.

Last night, Devonte was hurting late, but Coach wouldn't sub him out. He took him off the lane for FT's, but that was it. It definitely underscored Josh's off night & DQ.

The game shows the strength of this team. Even with the 2nd best player looking more YMCA (in many ways) than Big12, and the 3rd best player being off, we were still able to beat a decent team on the road. (Will TCU make the tourney?) Hopefully, it was a nice wake-up call from the Big12.

Mason's jumper has improved a lot this season. He should take more shots like that. I love how he involved Lucas with the lob vs TCU, too. Lucas should be on top of the list as co-1. His nice spin move definitely a great sign. Bragg, still has long ways to go, offensively, as a 5. But, his jumper can definitely helps from the wing.