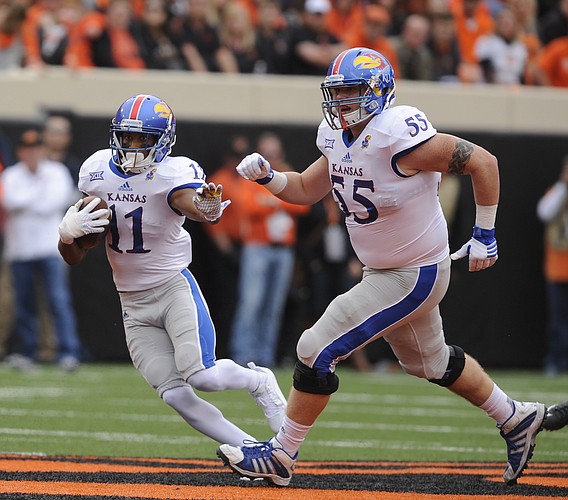 No. 1 - Tre’ Parmalee: When everything is falling apart around him, which is quite often on such a young, overmatched squad, Parmalee continues to carry out his assignments with equal parts efficiency and enthusiasm. Catching everything thrown his way and showing excellent creativity after the catch, Parmalee had six receptions for 115 yards.

No. 2 - Joe Dineen: One week after making 10 tackles vs. Texas Tech, Dineen topped himself with 11 tackles, the most memorable coming when he blitzed from quarterback Mason Rudolph’s blind side and dropped him with a punishing sack.

No. 3 - Steven Sims Jr.:  The true freshman turned a short pass into a 33-yard gain for KU’s lone touchdown. His second TD catch of the season tied him with Parmalee for the team lead.

No. 4 - Ryan Schadler: The walk-on used his speed to take a kick return 36 yards and finished the day with 107 yards on four returns.

No. 5 - Ben Goodman: Draws extra attention from the offense every week and never stops trying to get to the quarterback.

No 6 - Jeremiah Booker: A big target and physical receiver, Booker needs to become more skilled as a blocker but already is developing into a valuable target for QB Ryan Willis.

No. 7 - Daniel Wise: Had six tackles and one of KU’s four sacks. Coaches are seeking more consistency and maturity out of him, but he has been having more of an impact of late.

No. 8 - De’Andre Mann: The holes just weren’t there, but Mann managed to grind out 30 yards on seven carries.

It's sad when your best play of the second half is the opening kickoff. It was a penalty, a pooch punt out of bounds, but still the best play.

I suspect there is a typo in here somewhere.... the article says Dineen had 11 tackles, then goes on to say Smithson topped the team with 10 tackles.

Bill Kackley, it says that now. It didn't say that originally. Obviously it's been updated since my post.

Looks like we took a big step backwards but the defense gave up almost the exact same amount of yardage as last week but the lack of offense kept them on the field too long. Add the penalties and turnover differential and this is what you get. Loved the play of Tre' and even though Willis did not have a good day I continue to be encouraged. We may not win a game but I am excited about the future.