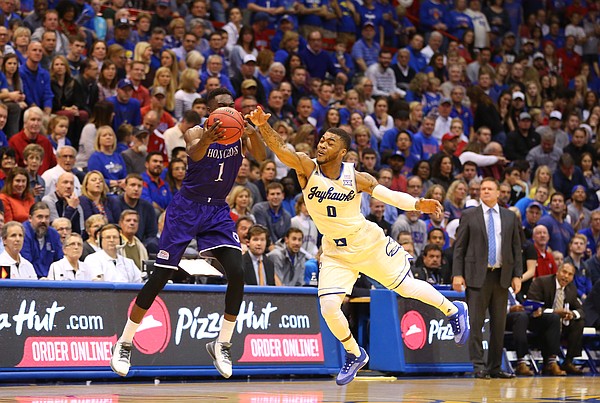 1. Frank Mason III — Relentlessly pushed the pace all night and did so without wearing himself down to the point of becoming ineffective on either end. Made 5 of 6 field goal attempts (including both three-point tries) and added 5 assists, three rebounds and even a block in a team-high 27 minutes.

2. Brannen Greene — Back from suspension a game earlier than expected, the junior sharp-shooter made all but one shot — 3 of 4 from behind the arc — and even put the ball on the deck and attacked the rim. Scored 14 points in 17 minutes.

3. Wayne Selden Jr. — Set the tone early with a couple of three-pointers (he's now shooting .595 from three after a 3-for-4 night) and continued to attack and play with a ferocious mentality. Scored 15 points on 5-of-9 shooting and added 4 rebounds, 4 assists and 2 steals but also turned it over four times.

4. Perry Ellis — Delivered another pretty quiet night but finished with 12 points on 6-of-8 shooting and scored with ease in the paint.

5. Devonté Graham — Made 2 of 3 three-point attempts and set the table in transition five times for teammates. Also snagged three steals and just continues to look stronger and more confident each time out.

6. Cheick Diallo — Struggled through a few rough stretches and still looks like he's behind — especially in the eyes of Bill Self — but his motor never stops revving and Wednesday night it led to 12 points and four rebounds in 18 minutes.

7. Carlton Bragg — Had 4 points on 2-of-4 shooting, and committed four fouls, but all five of his rebounds were of the offensive variety, including back-to-back impressive boards on a possession that ended with a Greene three-pointer.

8. Sviatoslav Mykhailiuk — Finally made a three-pointer again (1-of-3 from downtown) and scored two buckets in transition while grabbing four rebounds and turning it over twice.

9. Hunter Mickelson — Was active early, especially defensively, but didn't do much to fill up the stat sheet and committed a couple of silly fouls while starting in place of injured Jamari Traylor.

10. LeGerald Vick — Contributed two assists and a steal in just five minutes and missed his only shot.

Hunter had a greater impact than you give him credit. Defense, blocking shots and great passing of the ball. Actually he didn't get many chances to score as the outside players shot treys without attempting to pass inside.

Aside from unnecessary fouls, Hunter needs to show some offense – if only to keep opponents honest.

Evan (and young Self) are pursuing their goals of careers in basketball other than as NBA players – either coaching or staff.