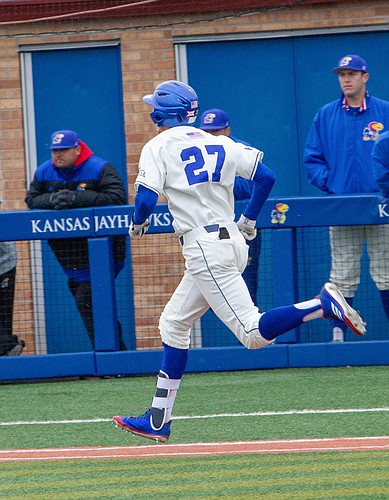 Kansas' Devin Foyle runs to first base after a base hit, Saturday, April 14, 2018, during a game against TCU at Hoglund Ballpark. The Jayhawks fell to TCU, 13-3. by Carter Gaskins

The Florida Marlins chose hard-throwing Kansas closer Zack Leban in the 12th round with the 357th overall pick of the Major League Baseball draft, the Oakland A's selected Jayhawks right fielder Devin Foyle in the 17th round with the 503rd overall pick, and the Pittsburgh Pirates selected Brendt Citta as a catcher in the 38th round.

Leban, whose 95 mph fastball was the chief reason he was tracked closely by scouts, walked 12 and struck out 36 in 39 innings and had 12 saves his junior season. He was declared academically ineligible to compete in the Big 12 tournament.

Right-hander Jackson Goddard was drafted by the Arizona Diamondbacks in the third round Tuesday, becoming KU’s highest draft pick since 2003.