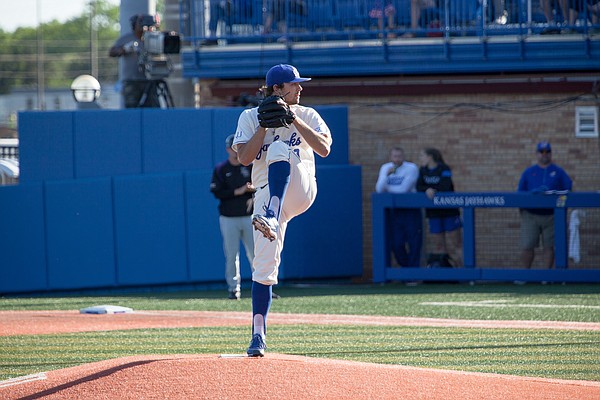 Kansas pitcher Jackson Goddard winds up for a pitch in the second inning against Kansas State in the Sunflower Showdown on Friday, May 12, 2017 at Hoglund Ballpark.

Unless he lasts longer than most expect, University of Kansas right-hander Jackson Goddard will become the highest draft pick since 2003 Pittsburgh Pirates second-round draft choice Tom Gorzelanny, a left-handed pitcher.

"Is that right?" Goddard said by phone from his family's home in Tulsa. "I didn't even know that."

Gorzelanny, 35, is pitching for the New York Mets' Triple-A affiliate in Las Vegas, has a 50-53 career big-league record and has pitched in the big leagues for parts of 12 seasons for six different clubs (Pirates, Cubs, Nationals, Brewers, Tigers, Indians).

Up to this point, lefty Wes Benjamin is KU's highest draft pick since Gorzelanny. Benjamin, selected in the fifth round by the Texas Rangers in 2014, is in Double A. He's 3-4 with a 3.91 ERA and has 18 walks and 53 strikeouts in 53 innings.

Since Gorzelanny who pitched for KU in 2002 and transferred to a junior college for his final semester in 2003 for academic reasons, KU has had six players chosen in the first 10 rounds of the MLB draft:

The seven Jayhawks who have made their major-league debuts this century:

I'm reading that Gorzelanny is a free agent and is currently unsigned. I know that doesn't have much to do with the article but being a baseball junkie I was trying to find more about him. If that's not correct I apologize.