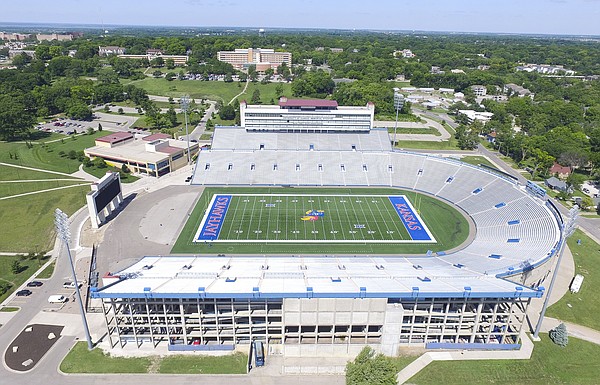 According to KU Athletics officials, Memorial Stadium is set to undergo a $300 million renovation. Currently, architects are completing renderings of the renovation plans. by Nick Krug

The downside of Big 12 membership for Kansas is that it ensures a brutal schedule for a rebuilding football program.

With the exception of Baylor (0-3), which visits Memorial Stadium on Nov. 4, every conference member is off to a significantly better start than Kansas.

The upside of Big 12 membership gets better all the time and far outweighs the burden the football schedule brings. After all, there is a positive as well to playing in such a tough conference. Members can recruit to it.

“It varies a little bit from institution to institution based upon how they did in some of our championships -- but we distributed a little over $34 million last year,” Bowlsby said. “That is about a 15-percent increase from the previous year. That also, I would remind you, doesn't include our third-tier rights, which in the case of several of our schools are very substantial. “So we felt like we really have continued to compete from a financial standpoint. Among the critical success factors for any conference is the ability to distribute money to its members, and I think that we've continued to keep pace there.”

In order to ensure it keeps its place in such a lucrative conference, Kansas must eventually get football turned around to the point it draws much bigger crowds and becomes a more appealing team for prime TV slots.

To that end, KU is trying to raise a stunning $300 million to renovate Memorial Stadium. No specific plans have been revealed for the first phase of renovations, but should come this month, perhaps tied to an announcement of a $50 million donation from a prominent KU graduate.

Even without a competitive football team in recent years, Kansas remains an appealing brand for apparel and equipment companies.

Look for Adidas to extend its six-year, $26 million deal with Kansas that expires in 2019, and do it in a way that could put KU at the top of its schools in terms of dollars and products received.

No question something needs to be done to the stadium but $300 million, what are they doing to do? Colorado State just built a brand new one for $220 million and KU is going to spend $300 million to renovate?

Im all for it. In no other way has Kansas made a statement that we're serious about football. 300 million on a stadium says that loudly and clearly.

At this point I don't think Jayhawk football could sell out if they played there games at Haskell.

Id have to know what the capacity at Haskell was, but at the very least you're getting on toward the truth.

All the renovations and upgrades in the world won't matter if we are not putting a decent team on the field.

I'd put it a little differently. The renovation/upgrades do matter (immeasurably) even given the current state of the football program.

The people ahead of me have some good points. CSU did build a whole new stadium for $220 million, although it didn't seem to impress the Big 12 Conference, and unless this team is decent they can't sell out a stadium no matter how nice it is. Ask the Chiefs. One question I have is if you're going to spend that kind of money is this stadium and this location the really the best place?. it's in a residential neighborhood on side streets and what about parking? Wouldn't the Rock Chalk Park area near the I-70/K-10 junction be better? It makes more sense to me for parking and for getting in and out. Or along K-10 at either Clinton Parkway, Bob Billings, or 6th. You have the three major arterials back to town. Presumably K-10 would be widened to four or even six lanes by then and you have easy access to I-70 to Topeka and Kansas City, of course K-10 to Johnson County and Kansas City and US 59 linking to I-35 and Wichita. Makes sense, right? At any rate I'd love to see a stadium like K-State's no matter where it is. It must be hard to recruit players to a bad program in a fading antique.

No, it doesn't make sense. At all. Six or seven home games a year don't dictate placing your stadium in a convenient travel corridor.

We have one of the best stadium locations in the country. We need a coach who can build a team worthy of the location.

...would certainly NEVER take the stadium away from campus.

If you think student attendance is horrible now, just wait to see what it looks like if the stadium was off campus... Horrible idea.

$50 million. Wow. If that's true, it's the only thing keeping Zenger employed.

Someone please spill the beans on this $50 million donor. Surely KU doesn't have too many billionaire alumni.

For those who don't think we can draw a new, quality coach and AD to town, look at it this way. As an incoming coach, you'd have plans in place for a $50 million stadium, 40-something from the two-deep returning and a completely renovated football training facility and locker room. I would think that Troy Calhoun, or Craig Bohl or Jim Leavit or Willie Fritz would find that combination enticing.

Imagine if, along with a new stadium announcement, someone like Calhoun was announced as our new coach? Think interest in the football program might pick up?

I don't see any movement anytime soon. The current administration appears ready for the long haul with the current coaching staff.

I'd still rather have Nike equipment. It's personal preference, and I just like their stuff better. I still have some Nike KU gear, even some with the block letters.

I'm sure some others would agree, but we have got to stop the nonsense with our football uniforms. Just have one home, one away, and one alternate. It'd save money and i'd laugh less at them which is always good.

KU doesn't pay for the uniforms, Adidas does.

You seem to think that money couldn't be used some other place? Nor did I say KU paid for them.

You didn't say it, but you clearly think that KU does. Adidas will not be giving us money to put towards something else lol. Adidas is fine, and the amount of jerseys they provide the football team is fine.

If I remember correctly, the $300M also includes a new indoor practice facility close to the stadium.

For all those commenters who want to change the AD and football coaches, please study the history of KU football. KU has never had a long-term winning coach (15 to 20 years). Every time a KU coach developed a winning team, he eloped to a better coaching situation. Recruiting and playing against Texas and Oklahoma each year (or every two years) was too difficult a situation for most coaches to handle. Even if KU recruits with a HC who can win with our current players, plus a few new recruits, he WILL NOT STAY! KU will simply be looking for a new HC again, as usual. The HC who follows a very successful coach is usually a worse coach who ends up being fired. Check our football history.

We have 25 freshmen and 11 redshirt freshmen; 27 sophomores, 2 redshirt sophomores on the roster. However, we only have 13 seniors, and 1 redshirt senior this year with Charlie Wiess leftovers and JUCO transfers. It takes time with consistent coaches and players staying with the program. HCDB is still trying to fill our scholarship numbers after 2 1/2 years, but hopefully can hang on to these current coaches to stabilize things. This rebuild was like starting from scratch. When you have 25 seniors and 11 redshirt seniors, then you've got a program again.

By year three there needs to be a sign of improvement. Losing back to back weeks handily to a MAC team is a step backwards from last year. And we are not the only young team in the country. I can live with that excuse for two years but this year we should at least beat the MAC teams and have two big 12 wins. The turnaround is not going to happen. And as I have said in other posts the clock is ticking for the next conference realignment and we cant get left out in the cold. Maybe BBALL can carry us but odds are not good