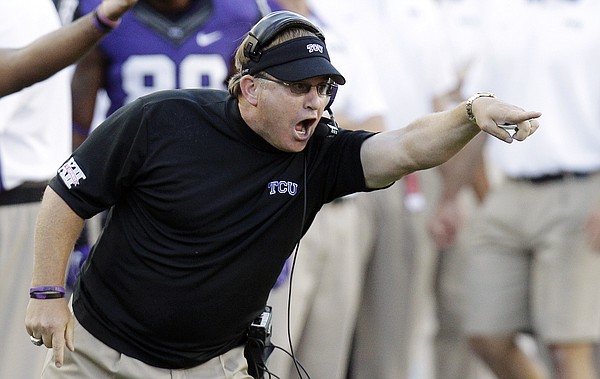 College football has more awards than Alibi Ike had excuses.

One day someone will come up with the idea for another trophy and won’t have any trouble figuring out what to call it: The Gary Patterson Comeback Coach of the Year Award.

TCU did not make college football’s preseason Top 25 for the very reason that it should have been included: The Horned Frogs were coming off of a 6-7 season.

The Horned Frogs (6-0) take a No. 4 national ranking into Saturday's 7 p.m. kickoff against Kansas and did not appear in the preseason poll. That makes Patterson’s record 29-2 in seasons his team was coming off a losing record.

At Big 12 Media Day, Patterson offered an interesting explanation for the blame for the disappointing 2016 season.

“I felt like I hurt my team a little bit. I got my knee replaced, maybe didn't give them as much energy,” Patterson said. “Again you have to blame yourself before you blame anybody else.”

That statement rang true with many who have had knee replacements, followed by grueling rehabilitation and lingering discomfort.

Plus, Kenny Hill, protected by a more experienced, better offensive line and more experienced, better receivers, has improved greatly in his second season at TCU. As a junior, Hill completed 61.1 percent of his passes, averaged 7.3 yards per attempt and threw 17 touchdown passes with 13 interceptions. This season: 69.8 percent, 8.0 yards per attempt, 10 touchdowns, three interceptions.

Then we should be undefeated next year.

I seriously think we should be dramatically improved next year. If not, then I think it's time to pull the trigger - metaphorically - on the coaching and AD decision.

David Beaty is not Gary Patterson but almost every other coach isn't either. With that being said, I've always wanted to keep my hopes up with Beaty but that is getting harder and harder to do with his constant fabricated upbeat outlook on the program or the game where KU just got stomped. He needs to make a move with Bowen or I'm out on Beaty. If he does make a move then I think we need to give Beaty another full year before we make a decision on his future. It's time for some accountability with Bowen. Oh and the whole hiding injuries of players and who is going to start at QB each game is such a joke and embarrassment if we need those kind of "advantages" going into a game.

What, specifically, has Beaty done to warrant another year? I keep waiting for one person on this board to point out one specific thing that balances out what has happened on the field this season, his third season. 49-0 and 65-14 and you think we deserve more of the same? And given Beaty's coaching hiring record, you trust him to pick a new D.C.?

This is a dumpster fire sitting on top of a mound of manure.

Your last statement sounds like Charlie Weis is back in the neighborhood. Lollollollol......

TCU is also running the ball better and more often than last season. I think they got rid of someone who wanted to pass pass pass and not establish a running game. I wonder whatever happened to that guy?

The biggest reason the trigger needs to be pulled on Beaty right now is the fact that we have a lot of returners. They may or may not be very good, but they provide experience, leadership and depth. Bring in a solid coach and you could see a major jump next year. Bring Beaty back and no one if KU football world will even care.

I think they should pull the ticket sales guys together in a room and let them decide. I'm guessing I know what they'd say.

The reason for bringing Coach Beaty back is because he is finally getting the team back to close to a full roster. That was a huge task that has been forgotten in our microwave society. As the article breezes past but significant nonetheless is that we're still ridiculously young. 6 seniors! Is there any team with fewer? Even with an established program like TCU it apparently made a difference. How much more should it with an unestabllished program like KU.

I will admit though that the recent results are discouraging.