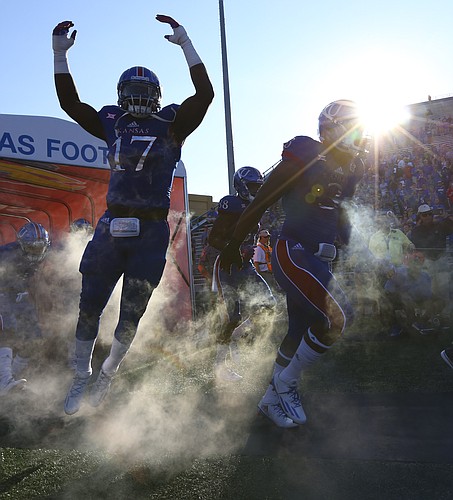 The Kansas Jayhawks exit the tunnel to the field before kickoff against Rhode Island on Saturday, Sept. 3, 2016 at Memorial Stadium. by Nick Krug

Kansas basketball coach Bill Self said that he left Udoka Azubuike in at the end of the 100-54 exhibition blowout against Pittsburg State for conditioning reasons. Not a bad idea. Azubuike looked winded at the end of his 24-minutes night.

But as the season wears on, there will be games in which Self will want to rest all of his rotation players. As transfers from four-year schools, guard Charlie Moore and forwards Dedric and K.J. Lawson are eligible to practice, but can’t play in games.

At the moment, Kansas has eight scholarship players and two walk-ons available to play in games. Once Sam Cunliffe becomes eligible second semester, his anticipated debut coming at Nebraska, Kansas will have nine scholarship players, plus two walk-ons. One more walk-on, particularly a big one, wouldn’t hurt.

Through the years, college basketball coaches have addressed roster shortages by hitting up the football coach for help.

A review of KU’s football roster reveals one former basketball player worthy of some late-game minutes once the football season ends.

James Sosinski, a 6-foot-7, 260-pound tight end from Chandler, Arizona, put up nice numbers for South Mountain Community College in Phoenix last season. He averaged 19.1 points and 12.6 rebounds for South Mountain as a freshman. He has not yet appeared in a game for the football team. He would get more playing time if he joined the basketball team.

Sounds like he should have been on the bball team in the first place.

Sosinski went to UMASS and redshirted as a QB, then left to play b-ball at South Mountain. And now is a walk-on tight end at KU. The kid is athletic and versatile. I hope he sticks around the program long enough to make an impact.

With our lack of a decent offensive line, maybe we should try him at QB. Maybe it wouldn't be as easy to knock down a 6'7" 260lb QB.

It worked in 1988. Clint Normore walked on for KU basketball after the end of the 1987 football season, and he scored 7 points in the title game against OU. Without those 7 points, KU loses to OU by 3.

Clint was awesome. Played significant minutes. He hit one 3 from steps beyond the top of the key as the shot clock was expiring. Probably my favorite play of all time though was an incompletion to Harvey Grant on a crossing route that Clint broke up, or was that an attempted dunk that got stuffed. Could careless that he got called for a foul on the play.

There was also a big guy, like Sosinski, that practiced, but didn't see much game action. Marvin ?

Marvin Mattox was the player in question

If for no other reason, it would be a good move because it gives you 5 more fouls to play with.

Can a non-scholarship transfer walk onto a team? I can't believe there wouldn't be a big man some where in America who would jump at the opportunity if given the chance!!

Great memory, Bryce and Dirk. The Marvin you may be referring to was perhaps Marvin Branch, who was a 6'10" center from Detroit. He didn't get much playing time as Danny Manning handled the post that championship season.

I have to admit, Dirk, you did the hard part of remembering the first name. I simply googled the 1987-88 roster, and found his name on the roster.

I recall 6-8 footballer who also played basketball under Ted Owens in 67 or 68. Vernon Vanoy. Pretty good two sport athlete....if my memory is accurate.

"KILL VERNON KILL"....yep, your memory is still pretty good. Actually, VV was better than just pretty good. He was named the Big Eight Sophomore of the year in basketball. [Freshmen weren't eligible back in the Stone Age when I was at KU, 66-71].

Marvin Branch was an academic casualty at semester break. Nice article by Chuck in the archives.

Not much but here's a little from his HS school days

Tony, I was at KU during Vernon's era and even resided in Joseph R. Pearson dorm where many of the athletes, including Vernon and the great Jo Jo White, lived.

Vernon was as nice and humble a person as you could find away from sports, but once he strapped on his helmet or laced up his sneakers, he was one of the best, two sports athletes in KU history. Of course, nobody could top Wilt for his basketball and track exploits. What a rich tradition!

One little anecdote. I bumped into to Jo Jo one time in the dorm, and after I caught my breath, I asked him about the infamous sneaker controversy in the game with eventual National Champion Texas Western (now Texas-El Paso). He confirmed that he was out of bounds by a hair, but that, if he had been wearing black sneakers, it would have blended in with the sideline and might not have been noticed. Let the controversy live 50+ years later.