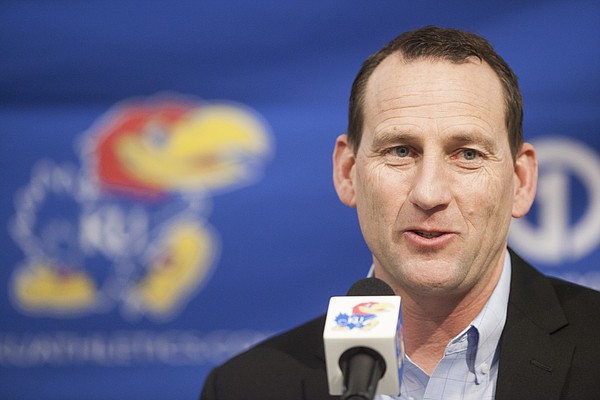 In any sport, an eye for talent tends to be the most underrated aspect of a coaching staff that recruits well. Kansas basketball guards Frank Mason, originally committed to Towson, and Devonte’ Graham, initially bound for Appalachian State, remind us of that every time we see them play basketball.

Evaluation skills play a big part in college football recruiting as well. Kudos to the coaching staffs at Kansas, Kansas State and Duke, the only FBS schools to offer a scholarship to Todd Reesing coming out of high school.

So what do we make of Kansas coach David Beaty’s staff in this area?

Well, based on where five of the players who received FBS offers from Kansas and made verbal commitments to Beaty are expected to sign Wednesday, the staff does seem to know how to judge talent.

Offensive tackle Grant Polley stayed faithful to Colorado after overtures from Oklahoma and Texas. Offensive tackle Jared Hocker backed out of his commitment to Texas Tech in favor of Texas A&M.

Others switched as well, but those five were the biggest losses among players who originally committed to Kansas.

Switching schools is far more common in football than basketball and there are different ways to go about making offers.

KU offers early, hoping that being the first to offer will make the athlete believe that nobody believes in him to the extent Kansas does. Once an offer is made it’s out of the school's hands as to whether it gets publicized. The athletes, out of either pride or to gain more leverage with other interested schools who might be nudged into offering once they know competition exists, generally go public with offers.

It didn’t work with these five athletes, but ask yourself this question: If Polley had been offered by Colorado, Oklahoma and Texas and then Kansas became the fourth school to offer, do you think KU lands him? No shot.

Not all the big fish got away. Juco quarterback Peyton Bender and high school running back Dominic Williams, to name two, are among those from Beaty's third signing class who have the talent to make a major immediate impact.

Still, it will take climbing out of last place in the big 12 to make a significant move up the ladder in recruiting, and even at that it won’t happen overnight.

Developing recruits by coaching them up daily in practice is the key to winning, which in turn becomes the key to landing more athletic players to develop.

There are no trophies for second or third place in recruiting, but if there is a trace of a silver lining, however difficult to see, it’s that KU’s coaches appear to know a player when they see one. Given that, maybe some of the lightly recruited prospects who will be discussed at Beaty's press conference Wednesday will end up being better than schools who passed on them realized.

When a coaching staff display the type of savvy that this group does, stars can be tossed out the window for the most part. I would say hope is coming, but the last guy that made that a slogan is in prison.

Kansas has some talent but must develop the rest and that takes time, playing kids before they are ready physically mentally in game experience leads to mistakes which leads to losses.

Im stunned that Dominic Williams stayed true to his word he committed in Sept of 15! 15! How many kids decommitted from KU in that time, props to him. Also KU has had some visits from players who are highly rated, KU coaches got them to at consider KU come to campus on a visit, that's a start, Mike Lee took a chance hopefully someone else might as well. It starts with one DW is the one this year l believe.

This article explains most Kansas's problems.

Beaty could have a big recruiting year next year. With the new O.C. and QBC's in place, a 7-game home schedule and a distinct chance to be competitive in every single game we play, we could possibly make that leap into the top-half of the conference in recruiting. Get there and stay there, and the next step is a real possibility.

How high can KU football go? Tough to say because no one has ever really taken it to a consistently high level. I know this, outside of OU and Texas, there is no reason we can't consistently finish above every team in this conference, every single year.

Consistency is key, but it isn't enough. TTU, Baylor and TCU all consistently recruited Texas but, until Rick Leach, Art Briles and Gary Patterson showed up, these three schools were never much to speak of on the gridiron.

Does Kansas have it's version of one of those three coaches? We'll have a crystal-clear view just before we hit 2020.

Can you imagine if he would have chose KU? What an earthquake that would have made in college football recruiting. Obviously was never gonna happen but wow.

KU football should out perform the recruiting based projections because they won't include the blueshirts in particular that are now starters.