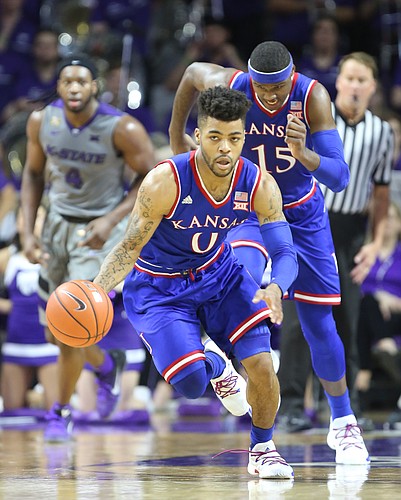 Kansas guard Frank Mason III (0) charges up the court with the ball on a break during the first half, Monday, Feb. 6, 2017 at Bramlage Coliseum. by Nick Krug

Exhausted but unwilling to let that curb his enthusiasm level, Frank Mason III on the same night that he compiled statistics below his standards enhanced his chances of winning national-player-of-the-year honors.

Mason led Kansas to a 74-71 victory in Manhattan over a tough Kansas State squad by scoring 21 points on 7 of 17 shooting and had just two rebounds, three assists and four turnovers.

Yet, anyone who watched the way he willed his team to victory and on one play was going so fast, hustling so hard, that he ended up crashing into the second row of the press area in the end zone, had to reach the obvious conclusion: He’s leading the Wooden Award race.

Mason’s most impressive stat of the night: He played 38 minutes. That’s what third-ranked Kansas needs out of him because the roster has more holes than usual.

Mason has a higher scoring average (20.4), minutes total (35.8) and 3-point shooting percentage (.519, fifth in the nation) than anyone on that list and he’s doing it in a conference loaded with standout point guards.

He puts his fingerprints on every aspect of the game.

“You know what, I’m biased, but he makes big plays, he makes hard shots, he doesn’t shoot near as many free throws as sometimes I think he should, but on-the-ball defender at game point, he’s about as good as there is,” Kansas coach Bill Self said. “So he does a lot of things to give a team a chance to win.”

And he makes the most of those chances with clutch plays in all areas at the end of close games.

For Mason to play as many minutes as he does, compete so hard defensively, soar above way bigger players for defensive rebounds and still have the energy to shoot such a high percentage is a testament to his remarkable physical and mental stamina.

Ball (15.1 points, 5.8 rebounds, 7.8 assists, .430 3-point percentage) is doing amazing things for UCLA in 35.2 minutes a game, but Mason is carrying an even bigger load for depth-shy Kansas than Ball is for the Bruins.

Mason would be KU's first AP player of the year.

Let that sink in for a minute...

He should be the leading candidate, but he's not and won't win. There are more sportswriter in New England area that the rest of country combined. Josh Hart will be overvalued. East Coast bias does exist.

While I agree that there is definitely an East Coast bias (see the ridiculous hype for Duke-UNC each year), there are a ton in the media from all over that have taken note of what Frank is doing each night. That gives me hope that Frank will get the recognition he deserves.

Hart is playing well this year and putting up big numbers, but I read an article from Rob Dauster today with his rankings for NPOY in which he has Hart second. One of the main reasons for this that he pointed out was that Villanova is playing in a much weaker conference this year than KU and their major contenders have all fallen off due to injuries and poor play. Consequently, Hart's resume is going to be lacking some signature game or moment. Contrast this with Frank who has the shot against Duke, his game at Kentucky, home against Baylor, scoring 32 against ISU, and the ridiculous steal last night against KState. His highlight tape from those games alone would make a career for most players. Not to mention he's putting up 20 and 5 on a consistent basis and could become the first Big 12 player to do that.

We'll see how it all shakes out, but as of today there are plenty on the #BIFM bandwagon that have him winning the NPOY.

Sadly, he won't win because of the extreme East coast media bias--Unless KU wins the NC--then they won't be able to deny him his due. Too bad that he's not from Puke, NC, Nova, etc. He's still our hero and our stud player.

The vote is before the FF if I remember correctly.

When do they announce? Just before the Final 4? I'm guessing it'll come down to which team makes it farther in the tourney... Villanova or KU.
I thought Ellis was a shoe-in for 1st team All-American until his disastrous Elite 8 game. They announced that team just before the final 4 last year.

I just watched a college basketball show on ESPNU. They listed the top 10 leaders for the Wooden Award. Frank wasn't even on the list. I couldn't believe it so I backed it up and paused it to double check. How can that be? It must have been a mistake.

Forget it. It turned out to be freshmen only