Multi-millionaire in the making Udoka Azubuike packs ton of potential 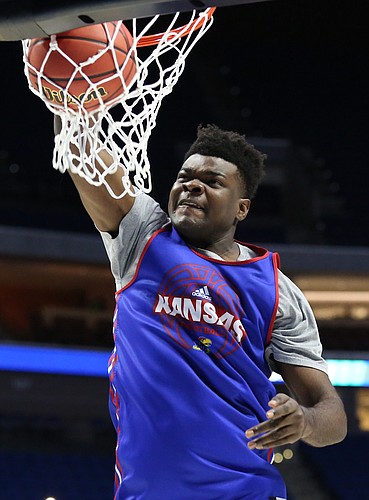 Injured Kansas center Udoka Azubuike (35) delivers a dunk at the end of the Jayhawks' practice on Thursday, March 16, 2017 at BOK Center in Tulsa, Oklahoma. by Nick Krug

He played in just 11 games, went scoreless in two and scored in double figures in just one, yet even at that, Udoka Azubuike left no doubt that he will have a lengthy NBA future and earn tens of millions of dollars playing basketball.

If I had my choice of skimming 1 percent of career earnings from any player eligible to compete in games next season for Kansas, I would choose Azubuike, even ahead of guard Malik Newman.

The pool of 7-foot, 280-pound athletes with nimble feet, pretty sure hands and a zest for punishing rims is quite shallow.

Speaking at the program’s annual banquet, KU's Hall of Fame coach Bill Self called Azubuike, “probably the most talented big guy that we’ve had here in a long, long time, other than Joel (Embiid).”

Self added that Azubuike’s trajectory “is off the charts,” reminding the audience that the big man won’t turn 18 until next Sept. 17.

“When he was hurt, we thought that was a huge blow because he’s going to be so darn good,” Self said.

Azubuike totaled six points and 12 rebounds in 15 minutes vs. Duke, overpowered a short UNC-Asheville with 17 points in 23 minutes, and in 11 games blocked 18 shots in 142 minutes.

More often than not, he dunked, and hadn’t developed enough shooting skill to do any better than .379 from the free-throw line. The good side of that coin is that he hangs out close to the basket and doesn’t entertain any guard fantasies.

Azubuike showed great potential and raw edges during his 11 games, but it's not as if he's been playing video games all year without learning anything that will help him next season.

"From him sitting through every scouting report and making him a part of everything that's going on, I think he definitely understands the game better than he did, without question," Self said.

If Azubuike can become a respectable free-throw shooter, eliminating Hack-A-Dok as a defensive strategy, he'll be extremely difficult to guard and quickly become more than just a shot-blocking, rebounding force. He's a very exciting prospect.

If he continues to struggle mightily from the line, Azubuike ought to consider shooting free throws underhanded. Wilt Chamberlain and Rick Barry, two Hall of Fame perennial All-Stars, weren't too proud to do it.

Besides working on his shot, notably FTs, Azubuike needs to get his body in shape to play basketball. He still needs a good solid year of conditioning and court time before he becomes a consistent factor on the court. He may need two more years at Kansas but it's really hard to teach someone to be 7', strong, intelligent, and tough.

I would LOVE to see someone shoot free throws underhanded.

Ask and ye shall receive: https://www.nytimes.com/2017/02/08/sports/ncaabasketball/underhand-free-throw-rick-barry.html?_r=0

Not surprisingly, Canyon Barry made 88 percent of his free throws. Athletic guy too. Had a great blocked shot at the rim in a key spot during tournament. Rick Barry was a phenomenal player.

Josh should also consider this approach. I know that it takes a lot of guts, but just like the old piano lesson ad went...."everybody laughed, until I sat down to play".

I think Dok will explode next year. I really don't think we will have him after next season. I've never seen a KU big improve from game to game the way he did in his limited time this past season. I think he will be a double double machine all year and go to the NBA between 10 and 20th next year. You heard it here first!

All right may I be a devils advocate. Yes Paypal Cal from Kentucky brags about only one year and then pro and can finish college later if desired. But there are many that sorta what I call stick it out and graduate and then still achieve great pro years (tim duncan for example). You don't get your jersey in the rafters for a one year guy. Amazing that a Michigan Stater (maybe as well qualified as Josh Jackson) decided to return to school next year and get the green stuff later. The pros draft on potential and sometime that potential doesn't develop other times it does so paypal Cal gets featured on 30&30 after watching it last night yikes why not just forget about a college education and go to China and get that green stuff. Look if Dok want to spend more than one playing year don't say that is foolish. You're only young once and college can be enjoyable and worthwhile. Just ask Graham.