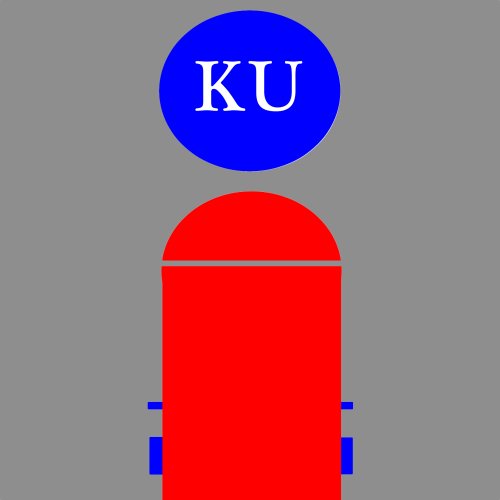 ict has been concerned about REHawk not having a proper avatar. This is my proposed customization of REHawk's default avatar. :-)

However, we can lead a horse to water, but we cannot make him drink. :-)

I like it bate. Hope he will use it

Okay, jb, this old horse has stepped up to the watering trough. If that's a penis, well...it rages with magnificent color. I'll take it. Now, how the hell do I go about uploading the image? Please consider, you are dealing with an old fart who can barely set his own wristwatch! My only real expertise lies in recruiting and coaching Jayhawk basketball.

1.) Rigth click on the image and click Save Picture As.... Remember when you save it too. I recommend saving it to your desktop.

3.) Underneath your name in the upper left corner and next to your non-avatar. Click Edit Profile.

4.) Enter as much information about yourself as you want to. But when you get to the Avatar Section, click browse. Navigate to your desktop, and select the image that you saved in step 1.

5.) At the bottom of the Edit Profile page, click save.

Thx for the huge assist.

I would love to know, when you came by this expertise. :-)

Leave it that I would be honored for you to use this avatar, simply on the basis of your contributions to this board alone.

Follow the instructions below given by another one of our board rats and use it at least until you find something better.

Best regards and very truly yours,

For those that think the logo for REhawk looks like a Johnson, please understand it is just the concept of the default avatar colored and modified to look like a lane with blocks.

jaybate and plastiJHawk, thanks for the tips. Sounds fairly simple. I'm spending my Sunday morning and early afternoon polishing and recording some favorite karaoke tunes (second best septuagenarian EXPERTISE). But will work on the avatar later today. Thanks for your artistic image and advice. A dandy avatar! No need ever to change it.

HA! Hey, jb, I came by my Jayhawk recruiting/coaching expertise a couple of years after I got so swacked one night at a bar that my bride of 40 years was able, finally, to nudge my boots, buckle and western hat before a karaoke mic. I gleaned enough applause that my newfound talents were off and running. Then same companion provided the nudge for more intense involvelment in all things relating to Jayhawk hoops. (I am a retired pedagogue, former middle distance runner who once spent a few rewarding years coaching winning public school runners, throwers, leapers in an institution known for longtime basketball success.) Ergo, here I sit, pecking away at a machine which often baffles me in its endless complex possibilities; but which rewards me in daily inneractions with LJW writers and posters who just might, unknowingly, assist me in attempts to keep my mind active and my blood pumping, warding off mental decay which has beset now deceased or confused friends, bloodkin, in-laws...some of whom even spent their lifetimes cheering for the hapless Missouri Tigers. Reason aplenty for propensities toward dementia. Fortunately, I married a Kansas grad whose clan vociferously and fiendishly supports Jayhawk hoops. She probably saved me from abject disillusionment, considering the chances that I might have reached old age supporting dreadful Tigermania, then cursing the powers that be for the turncoat hateworthy decision to bolt for that league of slavers. So, this missive provides about as much as I feel free to expose in the way of revelation of personal detail...and super-rational explanation for my expertise! I comprehend words and people much better than I do the Xs and Os of the sport of basketball...or the seemingly infinite intricacies of cyberelectronics, including hardware, software, facile manueverings to move from A to Z (or even A to D).

Also remember that UCLA Professor Gary Small has done studies that show searching on Google, or any search engine, for even a half hour a day builds new neural net connections in Alzheimers patients. Don't fear Alzheimers. It stinks, but it's also the new normal. And take fish oil capsules with omega 3 fatty acids. Its also shown to help build neural be connections. Rock Chalk!

Yee-Haw! The deed is done! Many thanks to those who helped. My postings shall be embellished, ever after.