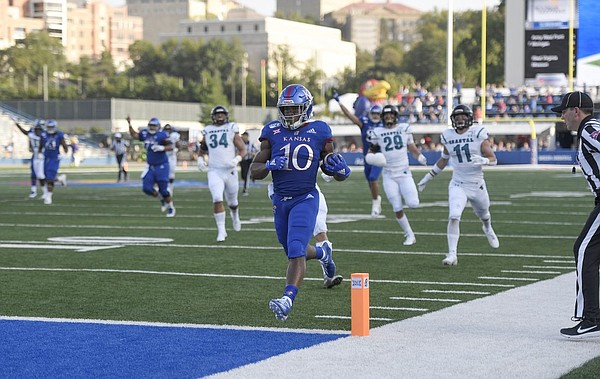 Kansas running back Khalil Herbert runs into the end zone for a 41-yard touchdown against Coastal Carolina Saturday night at David Booth Kansas Memorial Stadium on Sept. 7, 2019. by Mike Gunnoe

A total of 14 running backs went off the board before the Chicago Bears selected former Kansas running back Khalil Herbert with the 217th overall pick. Yet that doesn’t mean the Bears will temper their expectations for the running back who played his final collegiate season at Virginia Tech.

Chicago Bears area scout John Syty raved about Herbert’s playmaking ability in a video interview with Jeff Joniak, who is the team’s play-by-play announcer. The full video is available on the team’s Youtube page and was posted on May 5.

“What makes this kid separate from a lot of the other backs in this class is really just the subtle vision, his feet and his elusiveness,” Syty said. “(He’s a) very patient runner. But the second he sees something, he hits it and goes.”

“This guy is bringing a home-run ability every time he touches the football,” Syty said.

In that same round, the San Francisco 49ers picked running back Elijah Mitchell from Louisiana, the New York Giants took Gary Brightwell of Arizona, the Los Angeles Chargers nabbed Missouri’s Larry Rountree III, and the Cincinnati Bengals drafted Michigan running back Chris Evans. All of them went before Herbert, who is coming off a career year and posted impressive numbers last fall.

After playing four seasons at Kansas, Herbert transferred to Virginia Tech for the 2020 campaign. He ranked fifth in the nation in rushing with 1,183 yards and eight touchdowns on 155 carries. He also caught 10 passes for 179 yards and one score.

“He went to Virginia Tech his final year and that’s where he kind of got on the radar for us a little bit,” Syty said. “What Bears fans are getting is someone who really fits the culture we like to embrace in Chicago. (He’s a) hard-working and humble kid. Very passionate about running the football.”

None by Khalil Herbert

Herbert, who is listed at 5-foot-9 and 204 pounds, is also expected to make an impact as a returner. He averaged 26.9 yards per return on a total of 16 kickoff returns with the Hokies.

“Strong return qualities,” Syty said. “He did a lot of kick-return stuff at Virginia Tech this past season for them. Really productive and has that top-end speed to be a difference maker in that phase for us.”

According to Ourlads, Chicago’s starting running back is third-year running back David Montgomery. He is coming off a season where he piled up 1,070 yards and eight touchdowns on the ground on 247 total carries. Montgomery also caught 54 passes for 438 yards and two scores.

Tarik Cohen and Damien Williams are both slated behind Montgomery on the depth chart, so Herbert certainly has an opportunity to carve out a role with the Bears.

“I think the city of Chicago is going to really like seeing this kid put on a Bears uniform,” Syty said.

The Bears are not alone in thinking they got a steal, however.

In an ESPN article posted on May 5, Mike Renner of Pro Football Focus listed the Herbert selection as one of the best value picks of the draft. Herbert was considered the fifth-best running back on PFF’s big board entering the draft.

“Herbert's 2020 breakout was no fluke,” Renner wrote in the article. “We got a glimpse of that guy in 2019, when he averaged 9.2 yards per carry and broke 18 tackles on 42 attempts before leaving Kansas at midseason. After transferring to Virginia Tech, Herbert lit it up with 1,172 yards on only 155 carries and averaged 4.7 yards per carry after contact.”

“Herbert has legit home run speed and even had a kick return score called back this past season,” Renner added. “At 5-foot-9 and 212 pounds, he has the ideal body type to contribute on any down when called upon.”

So it is safe to say that Herbert’s NFL career will be worth monitoring for curious KU football fans.

I hope he does as well for the Bears as the previous KU running back did for them. How many years was Gale Sayers with them? Of course, I hope Khalil stays healthy for a good long career.

As you know, Gale had 5 power packed years with the Bears though.

Glad Herbert was a Jayhawk in the beginning, but was sorry he gave up on the KU football program mid-season (2019). Unfortunately, he will never be referred to as a Kansas running back that made it to the NFL. It would have been nice to have had him listed as "running back out of Kansas", but he will always be linked to Virginia Tech (his last stop). "He went to Virginia Tech his final year and that’s where he kind of got on the radar for us a little bit." I hope these kind of statements will one day be a thing of the past and KU football players again with next level ability get drafted out of Kansas.

Congrats. I never understood why he was in the shadow of Pooka. He was always the better back.