Three things that stood out about Buffalo O.C. Andy Kotelnicki after watching his coaching clinic 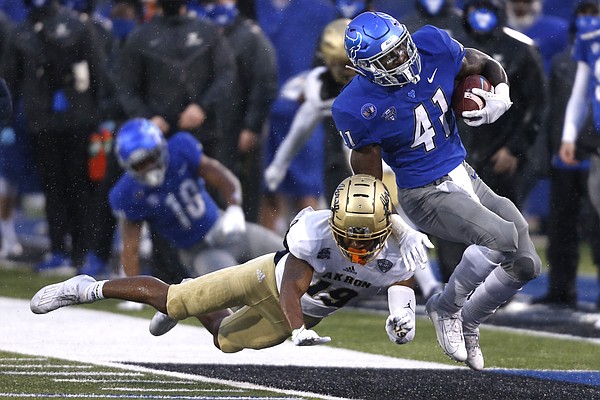 Buffalo Bulls running back Kevin Marks Jr. (41) carries the ball during the first half of an NCAA college football game against the Akron Zips at UB stadium in Amherst, N.Y., Saturday Dec. 12, 2020. (AP/ Photo Jeffrey T. Barnes) by Associated Press

That’s the question Kansas football fans might be asking, as new head coach Lance Leipold begins to put his coaching staff together just a few days after taking over the program. Kotelnicki is reportedly one of the seven assistants following Leipold from Buffalo to KU, according to a Monday report from Yahoo Sports’ Pete Thamel.

Given Kotelnicki has spent the previous eight seasons as an offensive coordinator under Leipold, he likely will hold that title in Lawrence. Kotelnicki was the O.C. for the final two years at Wisconsin-Whitewater before completing six seasons with Leipold at Buffalo. Kotelnicki has also coached every position group on the offensive side of the ball in his career.

But all of that is the standard information that you can find by looking at Kotelnicki’s bio.

Kotelnicki participated in a virtual coaching clinic on June 29 of last summer, which really helped give those interested a better understanding of his general offensive philosophy. The full hour-long video is available over at the “Virtual Football Clinic” channel on Youtube.

While Kotelnicki didn’t give away any secrets about his scheme, the video still provided a nice glimpse of what KU fans can expect from the team’s new play caller.

Here are three things that stood out about Kotelnicki after watching the full video:

Don’t expect Kotelnicki’s offense to be too complex, especially with the offseason being condensed due to the coaching staff arriving this late in the spring.

During the coaching clinic, Kotelnicki revealed that his typical call sheet on game day consists of approximately 90-105 different plays. He noted that includes plays like the quarterback sneak or a Hail Mary pass, which are usually on any team’s call sheet. 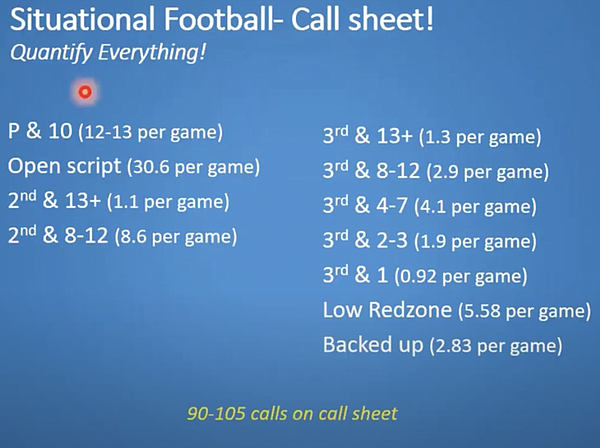 Here is a look at a typical call sheet for Andy Kotelnicki, who served as offensive coordinator for Buffalo over the past six seasons. This is a screen shot from a coaching clinic that Kotelnicki participated in last summer while everything was shut down due to the pandemic. by Shane Jackson

But that wasn’t always the case for Kotelnicki, who admitted to having more plays in his playbook earlier in his career before having a revelation. There is only so much time to practice all these plays, so he decided to only include plays that his team had practiced in a 11-on-11 setting prior to the game.

To better illustrate this idea, Kotelnicki refers to his philosophy as the “80/20” rule. An offense will likely get 80% of its offensive production (yards and touchdowns) from 20% of its playbook. That often leads to an emphasis on the base stuff, and making sure the offense can get that right.

“When you do the simple well, you are probably a pretty dang good football team,” Kotelnicki said.

Preparation is extremely important to Kotelnicki

Kotelnicki spent a bulk of the show talking about the importance of preparation and being organized as a squad.

That could mean from a macro-sense, such as having a yearly calendar. He outlined the importance of self-scout evaluations in the offseason, and using that time to study other teams to potentially implement new scheme ideas. He noted that the offseason is a good time to study the defensive structures of a team’s “must-beat opponents” as well.

But where that preparation really showed up was when Kotelnicki broke down a typical schedule during the week leading up to a game. He went through the daily schedule at about the 42-minute part of the podcast, based on how Buffalo operated during the 2019 season.

In a normal week, the first-team offense went against the first-team defense for 15 plays on Tuesday and 15 more snaps on Wednesday. They also competed against each other during the two-minute drill session on Thursday.

The offense also got about 168 reps against the scout team, which breaks down into 60 reps for team run plays, 54 plays for team pass calls, and about 20 reps for passing plays under pressure. Kotelnicki noted that his first-team offense will get about 60% of the reps in practice. 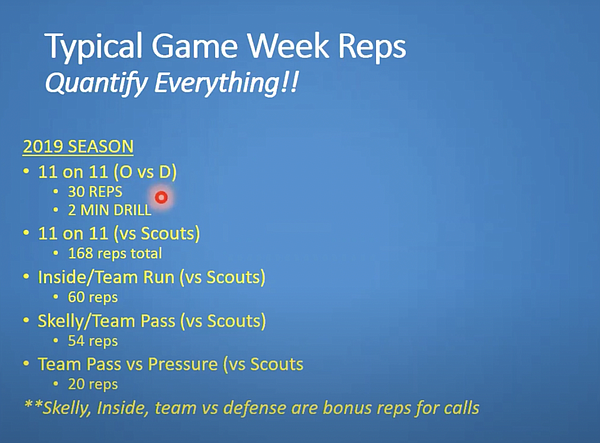 Here is a look at a typical game week schedule for Buffalo football provided by Andy Kotelnicki, who served as offensive coordinator for the team over the past six seasons. This is a screen shot from a coaching clinic that Kotelnicki participated in last summer while everything was shut down due to the pandemic. by Shane Jackson

It is a week that really starts on Sunday, as the staff gets on the same page about the schedule. All practice scripts are planned the night before to make sure nobody is scrambling to get things done right before the team takes the practice field.

“Just my perspective, the team who spends more time trying to be right Sunday through Friday typically has a better chance of being successful on Saturday,” Kotelnicki said.

Others will have input, including KU’s quarterbacks

All throughout the week, Kotelnicki is watching film and putting together the game plan along with the entire offensive staff. Jim Zebrowski, who served as co-offensive coordinator at Buffalo and is also coming to KU, is a big part of that as well.

In the clinic, Kotelnicki acknowledged that it would be more time efficient just to put everything together himself. Yet getting staff input is an essential part of his process throughout the week.

So much so that every Wednesday, Kotelnicki will ask each member of the offensive coaching staff to pick the 15 plays to open a game with. He does this to see how many specific plays end up being on multiple lists, because those calls always end up on the opening script.

It all leads to the staff coming up with the top 30-40 plays for a given game.

Kotelnicki also admitted to having his quarterbacks do this same exercise, citing that it helps quarterbacks begin to think about the game like a coach. That should be something to monitor while watching KU’s young quarterbacks develop over their respective careers.

It all just speaks to Kotelnicki’s overall mindset, as he’s willing to accept feedback from others while also trying to get on the same page as an offense.

Any offense looks great when you have an O-line like that. Hopefully the coaches can develop our bigs.