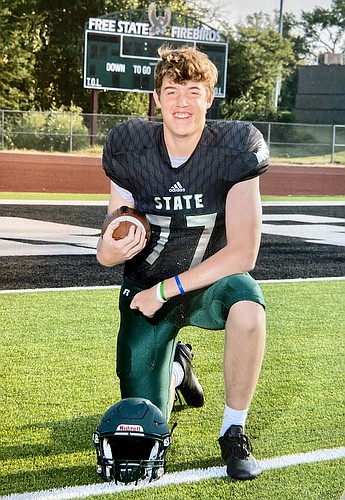 Free State junior offensive lineman Calvin Clements has three scholarship offers from Division I programs so far this offseason. Clements, who transferred from Veritas Christian High School, will make his debut with the Firebirds this fall. by Contributed

Despite having yet to play a snap of 11-man football at the varsity level, Free State junior offensive lineman Calvin Clements has already collected scholarship offers from a trio of Big 12 football programs.

That fact is not lost on Clements, who has received offers from the University of Kansas, Kansas State, and Iowa State so far this offseason. Clements, a transfer from Veritas Christian High School, also understands that he has earned this opportunity by competing in summer camps at both KSU and ISU.

“It’s pretty crazy when I think about it, to think that I haven’t played a varsity snap and I have three offers,” said Clements, who is listed at 6-foot-7 and 265 pounds. “But two of the three offers, I’ve been to their camps and I’ve proved that I can play and that I’m a good player.”

The Jayhawks were the first to offer Clements back in late April before Lance Leipold took over the program. According to Jon Kirby of Jayhawk Slant, former recruiting coordinator Joshua Eargle was the person who originally called up Clements.

Clements got acquainted with the new staff during an unofficial visit to KU last weekend. He met with offensive line coach Scott Fuchs and Leipold while getting a tour of the facilities. Clements admitted that the Kansas coaches talked about their plan for the program as well.

“They are definitely picking stuff up,” Clements said. “We’ll probably see a turn in KU football over these next few years. I trust those coaches, they definitely knew what they were talking about.”

Both the Cyclones and Wildcats followed suit with scholarship offers in June, but only after Clements competed in their respective summer camps. That meant they were able to get a firsthand look at his huge stature, and seeing how it translates on the football field.

Clements told the Journal-World that he doesn’t have a timeline for when he would like to make his verbal commitment. He will continue to be open to any offers, while weighing factors such as relationships with coaches and proximity to home when ultimately making his decision.

“It's definitely exciting that it's happening this early,” Clements said. “It gives me lots of time to think over stuff. Lots of times, for kids, the recruiting process can come late. But it's nice that it's coming early.”

Plenty more colleges will almost certainly call Clements before his FSHS career is finished. But his recent rise in the recruiting world didn’t happen by accident.

Before transferring to FSHS, Clements played tight end for Veritas Christian as a freshman. With the Eagles competing in eight-man football, Clements was asked to block a lot from his position while also flashing strong hands when the ball was thrown his way. Clements has natural athleticism, playing both football and basketball at a high level.

When Clements joined the Firebirds’ roster, it was actually former assistant coach Scott Frantz who suggested the position change. Frantz played offensive line for FSHS before ending up at Kansas State, where he started all 51 games at left tackle from 2016-19.

“He saw me and saw a left tackle project,” Clements said. “So he turned me into a left tackle, and I'm enjoying it a lot.”

Clements added 50 pounds to his frame while only playing at the junior varsity level for both football and basketball last year. The rest of the transition has been smooth, as Clements becomes more familiar with the technical aspect of offensive line play.

The potential is extremely high for Clements, who already has good length and size for the position to succeed at the next level. He is able to consistently reach defenders on blocks, but also displays good athleticism to get to the second level. One area where Clements would like to improve is his hand usage.

“I need to work on my hands,” Clements said. “Sometimes my hands can tend to get outside and you need to keep them inside.”

If he does continue to improve, Clements could be the next big offensive line prospect to come out of Free State. Turner Corcoran, who graduated from FSHS in 2020, was the top-ranked recruit in Kansas in his class before going to the University of Nebraska.

For now, Clements is just ready for his debut with the Firebirds this fall.

“I'm really excited,” Clements said. “I think we'll have a solid team this year. We've got more team camaraderie than last year, because last year was difficult with COVID.”

It would be nice to keep the top recruits home.

Good to see us getting in early, especially on a kid with a slightly unconventional high school path. I also saw where we are in heavy on a Kansas City kid who committed to play baseball at Nebraska.

I’m not expecting miracles in year one on local recruiting but it is good to see us active in the area.

If you track the history of the last five coaches at KU, Leipold has the combination of credentials and credibility that none of the other four coaches possessed. This will resonate with area high school coaches.

While Miles certainly had the credentials, the great coaching clinic fiasco resulted in KSU basically telling everyone in the state that he had dementia. And he couldn’t convince area coaches otherwise.

For Beaty, he was actually hired specifically to mine for Texas talent. I never faulted him for any sort of local recruiting issues. Frankly, had he succeeded at recruiting Texas, and won games, I’m pretty sure no one would really have cared where the players came from.

And who can forget when we sent coaches to schools so small they didn’t have actual football players? Beaty had no coaching credentials and no local credibility.

Weiss had name recognition but no local ties (credibility) and he simply went for big names.

Gill had no real credentials as a coach, though he was certainly well known in Kansas City as an accomplished Husker.

Leipold is a proven winner. And local coaches know this. Credibility will have to be earned but I think that an area high school coach will give him the benefit of the doubt because he is the real deal. And he has proven it.