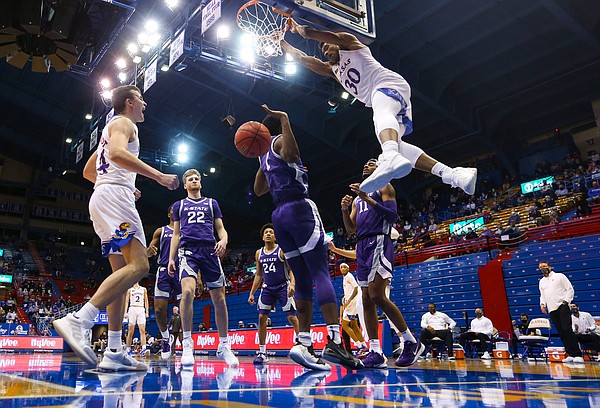 Kansas guard Ochai Agbaji (30) comes in for a dunk against Kansas State forward Kaosi Ezeagu (1) during the second half on Tuesday, Feb. 2, 2021 at Allen Fieldhouse. by Nick Krug

A lot can still happen, but the Kansas basketball squad appears to be loaded on paper entering the 2021-22 campaign.

So much so that trying to figure out a rotation or projecting out minutes for individual players seem near impossible, especially with KU having double-digit players worthy of seeing the floor. And good luck trying to pinpoint the team’s leading producers in terms of points, rebounds or assists.

Fortunately for us, Bart Torvik has his initial projections for KU’s squad available over at barttorvik.com. While it is still early and things could always change, this should help provide a glimpse at how it all might shake out for this Kansas roster.

Of note, Torvik has projections for 10 KU players and that list does not include KJ Adams, Bobby Pettiford, Mitch Lightfoot, Chris Teahan, Michael Jankovich or Kyle Cuffe Jr.

Here is a look at Torvik’s projections of Kansas for this upcoming season:

Let’s start with playing time, because that might be more interesting given the depth of this year’s squad. It is important to note that Torvik uses minutes percentage instead of projecting out the exact minutes per game.

Ochai Agbaji is projected to lead the Jayhawks in playing time, posting a minutes percentage of 82% for his final year in Lawrence. That would actually be a drop in playing time for Agbaji, who played 84.6% of KU’s minutes last year and 83.6% of the team’s minutes as a sophomore.

Junior Christian Braun has the next-highest expected playing time, with a minutes rate of 77% this year. Like Agbaji, that is down from last season when Braun logged 78.3% of the team’s minutes during a 21-9 campaign.

No other KU player has more than a 31% minutes rate entering this season.

While those two players might be favored to lead the team in scoring, Wilson is not far behind with a projected scoring average of 12.1 points per outing. Wilson is coming off his first real season at the collegiate level, where he finished with an average of 11.8 points per contest.

Torvik’s projection would match the total number of players who averaged in double figures last year, when Agbaji, McCormack, Wilson and Marcus Garrett all accomplished that feat for the Jayhawks.

Key producers in rebounds and assists

As for the other main categories, a variety of players are expected to make an impact on the glass and setting their teammates up.

Wilson is projected to pace the team in rebounding with an average of 7.1 rebounds per game. It would mark the second consecutive season that Wilson has done that, as he led KU with 7.9 rebounds per outing last year.

McCormack is projected to average 5.9 rebounds per contest, while Braun comes in third as a guard with an average of 4.7 rebounds per game.

Unsurprisingly, Martin is expected to lead Kansas with an average of 3.2 assists per outing. He’s averaged 3.9 assists per contest in his career, which includes a sophomore season where he averaged 5.0 dimes per game.

Wilson and Agbaji are tied for second with a projected average of 2.0 assists per game for this upcoming season.

I’m not sure what algorithm Torvik uses, but it is difficult to take serious these projections:

Braun’s playing time needs to be restricted unless and until his performance improves. He didn’t look good this past season.