Comparing how KU's offense did under center vs. shotgun against Indiana State 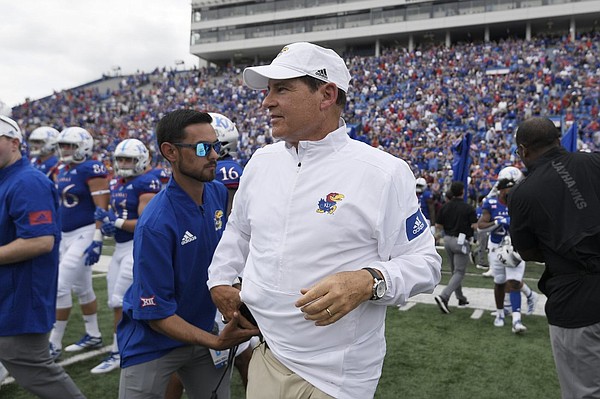 It was one of the few things we knew for certain entering the 2019 season opener.

As mentioned multiples times, Kansas head coach Les Miles didn’t reveal too much in the offseason when asked about his scheme. About the only things we knew for certain prior to KU’s 24-17 win over Indiana State was that the quarterback was going to be under center more often than in previous years.

That proved to be true, as redshirt senior quarterback Carter Stanley was under center more Saturday than he had been since well before his high school career. Stanley mentioned in April that it was an adjustment for him this past offseason.

Stanley was under center for 32 total plays against the Sycamores, including the final four plays to run out the clock. The Jayhawks still used shotgun on 31 plays, which included all eight of their plays on the game-winning drive in the fourth quarter.

It was probably an adjustment for fans, too. After all, Kansas operated mostly out of shotgun in its Air Raid system under David Beaty.

While it is still far too early to determine if Miles’ philosophy will lead to more success, it is worth looking at how things compared between under center and shotgun in the season opener.

For the purpose of this blog, I did not include the final four plays when KU was running out the clock. The play-by-play summary also didn’t give Stanley a pass attempt on his screen pass that resulted in a fumble, which I have counted as a pass from shotgun. As a result, the final numbers might be slightly off. But you will still be able to see where Kansas had most of its success against Indiana State.

In terms of yards per play, the Jayhawks had the most success when passing out from under center. Kansas took a few different shots on first down on play-action passes, though four of those plays ended up being incomplete.

By far the biggest gain came from when Stanley launched a ball from the I formation to junior receiver Andrew Parchment. The connection picked up 32 yards on a drive that ended with a touchdown pass from Stanley to tight end James Sosinski.

The Jayhawks did not throw the ball from under center in the first or fourth quarter, however. Kansas did attempt 12 of its 22 passes from shotgun in the second half, which is where both offensive touchdowns came from. KU picked up 145 yards via shotgun passes in the final two quarters alone.

On the game-winning drive, KU threw six passes from the shotgun formation. Stanley hit senior receiver Daylon Charlot for a 22-yard touchdown for the final score. Of note, Stanley is looking Charlot's way the entire time.

The run game, on the other hand, was far more effective from under center against Indiana State.

In the second quarter, Kansas ran the ball eight times from under-center formations to pile up 50 yards. During this stretch, the offense even used some hurry-up offense on one particular drive. On multiple occasions, the Jayhawks attempted a quick toss from under center. It was reminiscent of Miles' strategy when he had Leonard Fournette at LSU.

In the game, KU recorded three different runs of 20+ yards from under-center formations. One of those runs took place on the first play of the game, when Khalil Herbert picked up 33 yards on a run that he bounced to the outside.

For comparison, the team’s longest run out of the shotgun formation was just five yards. Three of the nine runs from shotgun resulted in a negative play.

Again, it was just one game. With Pooka Williams’ return, Kansas could easily have more success running out of the shotgun against Coastal Carolina with his ability to make things happen in space.

But, after an offseason of so much secrecy, fans at least got a glimpse of what Miles is bringing to Lawrence this past weekend.

Also interesting that we were more than twice as likely to run from under Center and pass from the gun. It would seem that teams could start to key on that, but maybe not if we can be effective in the exceptions.