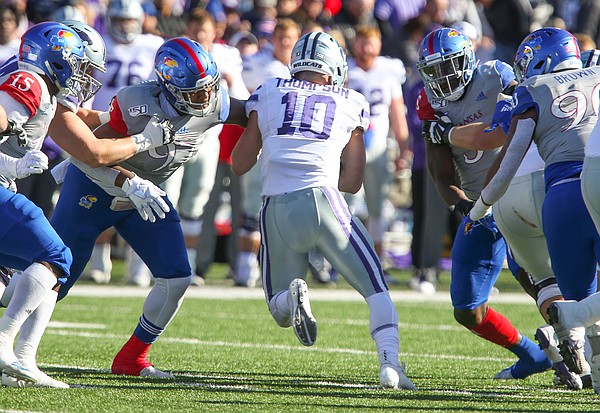 It was an interesting comment, and one that could ultimately explain a recent stretch by KU’s defense.

Kansas State quarterback Skylar Thompson recorded 127 yards and three scores on the ground via 17 attempts during a 38-10 win over Kansas in the Sunflower Showdown two weeks ago. After the game, many Kansas players were asked what went wrong on the defensive side of the ball.

“We weren’t necessarily expecting him to run as much,” senior Bryce Torneden said of Thompson. “We thought we had guys in the right place, but that’s a great player and obviously he showed that.”

What is interesting about Torneden’s statement is the fact that Thompson had 34 total rushing attempts in the three previous games. Yet with an extra week to prepare, the Jayhawks hope to be more equipped to handle a mobile quarterback in their road tilt with Oklahoma State this weekend.

After all, OSU quarterback Spencer Sanders ranks eighth in the Big 12 in rushing with an average of 65.3 yards per game. He’s second among quarterbacks, trailing only Oklahoma signal caller Jalen Hurts.

“We already know running QBs want to get out of the pocket,” senior safety Mike Lee said. “If we keep them in the pocket, the game will go how we want it to go.”

But containing Sanders from making plays with his feet might be easier said than done, particularly with how much the Jayhawks have struggled to slow down mobile quarterbacks as of late. Over the last three games, KU has surrendered season-high rushing performances to three different quarterbacks.

Thompson posted his best performance of the year in terms of yards and attempts. He accounted for 37.1% of the Wildcats’ 342 rushing yards on 28.3% of the attempts. For comparison, KU has allowed 2,118 rushing yards on the year and 18% of that production has come from opposing signal callers.

“It was surprising for us, but it was just minor mistakes by us,” linebacker Kyron Johnson said. “It was basically me not tackling and not keeping him in the pocket. We just got all messed up.”

Texas Tech quarterback Jett Duffey notched a season-best 40 yards on six attempts, many of which came against a three-man rush on third down, during a 37-34 loss to Kansas on Oct. 26. Duffey has only had one other game this season where he recorded more than 24 rushing yards.

One week earlier, Texas quarterback Sam Ehlinger piled up 91 of his team’s 239 rushing yards on 14 attempts. The performance, which was 21 yards more than his previous season-best showing, helped the Longhorns secure a 50-48 home win over the Jayhawks.

In total, 32.5% of the rushing yards produced against KU's defense over the last three games have come via quarterbacks. And scrambling quarterbacks have an impact on the passing game, too.

“We just learned to never give up on a play,” cornerback Kyle Mayberry said. “Even when you play the first route good, be prepared for the scramble drill.”

Not all quarterback runs are created equal, meaning there is not a specific pattern by KU’s defense over the last month. The Wildcats utilized designed quarterback runs via option plays, including three of Thompson’s four runs on the opening drive.

On 3rd-and-2, Thompson netted a long run on a speed option to the right. Thompson took off once Torneden moved toward the running back. Thompson then capped the drive off with a touchdown run after faking the handoff and getting to the edge.

Against Texas Tech, a majority of quarterback runs occurred when Duffey couldn't find an open receiver. He showcased the ability to pick up a first down with his feet rather than force things, though KU could have done a better job keeping Duffey from getting outside.

The Longhorns called Ehlinger’s number on the first two plays on designed runs to set the tone. While Kansas State’s success can mostly be attributed to blocking and play design, Ehlinger was simply too tough to bring down and got a bulk of his yardage by breaking tackles.

Unfortunately for the Jayhawks, they might be facing their toughest test yet when it comes to mobile quarterbacks. Sanders, who is a redshirt freshman, has 588 yards on 126 rushing attempts through nine games. Sanders has had double-digit rushing attempts in all but two of his games during his first year as a starter.

None by LandGrant Gauntlet

Sanders has been as advertised for the Cowboys. Coming out of high school, ESPN ranked him as the No. 7 dual-threat quarterback in the 2018 national class. He will be a different type of runner compared to what the Jayhawks have faced the last three games.

“It is just another quarterback that we have to keep in the pocket and keep an eye on,” Johnson said.

At the very least, though, KU’s defense should be more prepared entering this week’s matchup against another mobile quarterback.

How will he be a different type of runner this week?

I think he's a faster than the previous three quarterbacks from what I have seen on tape, and he's not someone that is going to run defenders over like Ehlinger.