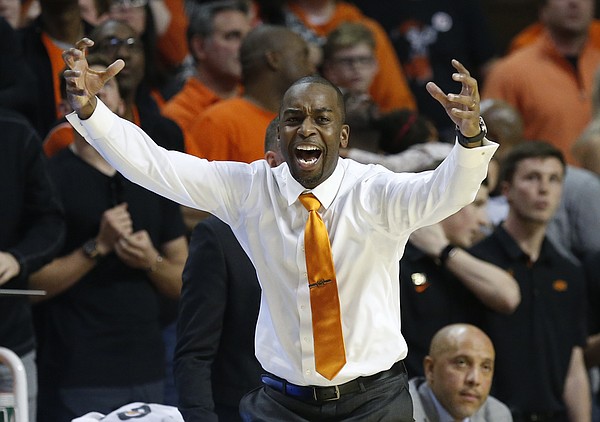 In order to keep The Streak alive, Kansas must win its remaining three games of the regular season.

KU (21-7, 10-5 Big 12) is coming off a 64-49 victory over Kansas State, which leads the conference race along with Texas Tech. The Jayhawks took down the Cowboys for an 84-72 win in the first meeting this year, which took place Feb. 9 in Allen Fieldhouse.

However, Oklahoma State (10-18, 3-12) is coming off an 84-80 overtime loss at Texas Tech and is clearly looking to play spoiler down the stretch.

“Hopefully the magnitude of the game for us (has our attention),” KU coach Bill Self said. “Every game is a big game in a league race. We need to be successful there (Stillwater). We haven't been successful there very often, it doesn't seem like.”

Series history: KU leads the series with Oklahoma State, 115-59, including a 36-35 record in contests in Stillwater. OSU holds a 35-34 edge in Gallagher-Iba Arena. 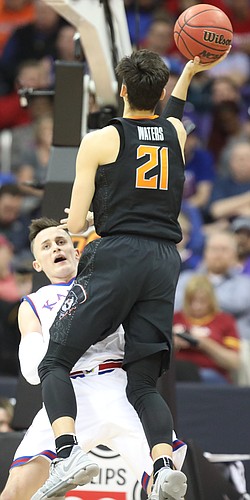 Every Kansas player, coach and fan should have an idea who Lindy Waters is after his theatrics against Texas Tech this week.

Waters knocked down seven 3-pointers, including four in the final 55 seconds of regulation, to take No. 11 Texas Tech into overtime in Lubbock, Texas. Waters is also the NCAA leader in free throw percentage with a mark of 92.9 percent. If the season ended today, Waters would be the third Cowboy to lead the nation in free throw shooting in program history.

This season, Waters is averaging 12.1 points per game and is one of three players to be averaging double figures. 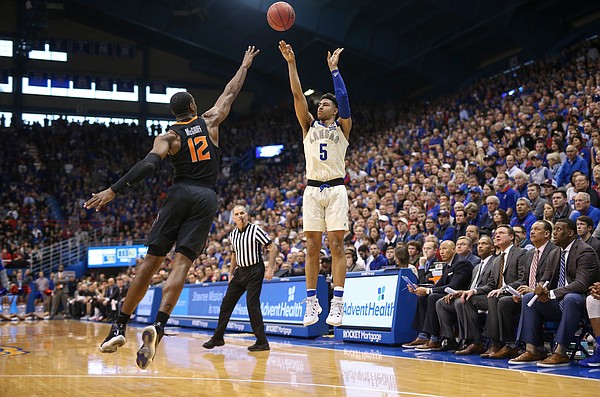 Kansas guard Quentin Grimes (5) puts up a three over Oklahoma State forward Cameron McGriff (12) during the second half, Saturday, Feb. 9, 2019 at Allen Fieldhouse. by Nick Krug

Entering this weekend, McGriff actually leads the team in scoring with an average of 12.3 points per contest.

McGriff is one of just two Big 12 players averaging 12.3 points, 7.5 rebounds and a 3-point mark of 30.6 percent or better. In fact, Dedric Lawson of Kansas is the only other player in the league to do so.

The junior is also crucial on the boards, as his 7.5 rebounds per game are the most by a Cowboy since Marshall Moses averaged 8.1 per game in 2009-10.

The third Cowboy to average double figures is Dziagwa, who is scoring 11.5 points per contest thus far.

Dziagwa has a chance to become just the fifth OSU player to ever knock down 100 3-pointers in a single season. As of right now, Dziagwa ranks sixth in OSU history with 93 makes from deep this year. He also leads the Big 12 with an average of 3.3 3-pointers per game, and his 45.1 percent clip ranks fourth.

In addition, Dziagwa has 20 games with at least three 3-pointers this year. 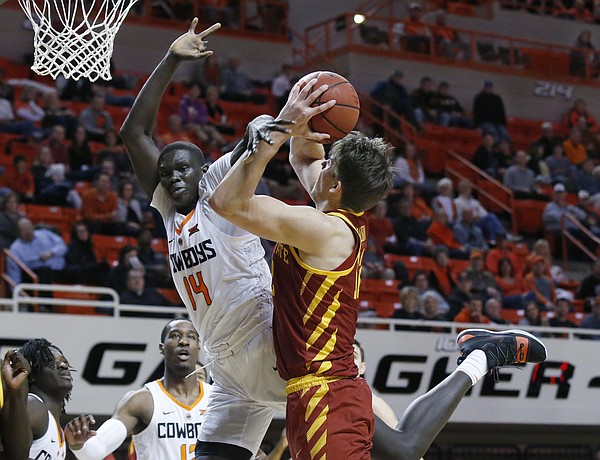 As a freshman from Overland Park, Kansas, Anei could be a difference maker this weekend.

Anei ranks third in the Big 12 and 30th nationally with 2.1 blocks per game. With 60 blocks on the year, he is currently tied with Bryant Reeves' senior season of 1994-95 for the eighth-most blocks by an OSU player in a season.

In fact, Anei already ranks 18th in OSU history in career blocks. He has at least one block in 13 straight games and in 24 games this year.

ONE THING OKLAHOMA STATE DOES WELL

Fortunately for the Cowboys, the one thing they do well is something they can take advantage of this weekend. Oklahoma State is shooting 38.2 percent from deep, which ranks 26th in the nation. KU ranks 150th in all of college basketball in 3-point defense.

The Cowboys are coached by Mike Boynton, who is 31-33 in his second season as a head coach with both at Oklahoma State.

"In order to (have a chance to) keep The Streak alive, Kansas must win its remaining three games of the regular season." Note to Shane, as of today KU still needs help. Waters was amazing down the stretch against TTU. His 4 3-pointers were well guarded. The way teams get upset is when the other team goes off from behind the arch. KU's defense has to be great.

I'm very aware, Andy. KU can't control what other teams do. Kansas must win this game, and win the other two as well to have any hope. That is all I was saying.

Also: REBOUND! Don’t give the Pokes second or third chances. If KU does, the extra shots will be easy threes.

Everybody in the building and watching on TV knows O S U has NO inside players and will shoot 3s all day. Except KU.