Why KU's rushing production should improve under new coaching staff 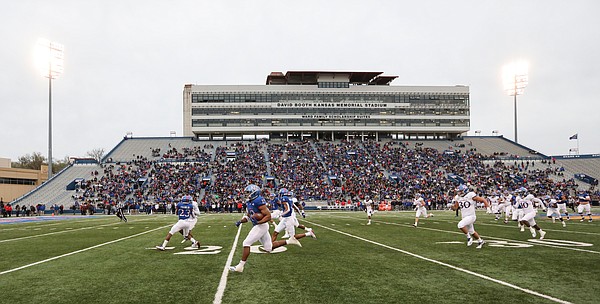 Blue team running back Khalil Herbert runs in a touchdown during Late Night Under the Lights on Saturday, April, 13, 2019 at Memorial Stadium. by Nick Krug

Since taking over the Kansas football program, Les Miles has not revealed many details about his offensive scheme during any of his press settings.

There is a reason for that, of course. Miles, like most head football coaches, would like an element of surprise for his 2019 opponents. That is probably something even more important for a coach that has been out of the game since 2016.

In early March, Miles was asked about his offensive philosophy during the start of spring ball.

While that particular quote suggests Miles is embracing more of a modern offense, it is worth noting his track record during his 15-plus seasons as a head coach would suggest otherwise. After all, history might be the best indicator of what is to come for the Jayhawks with Miles at the helm.

For this exercise, I looked at data from all the way back to Miles’ first year as a head coach in 2001 with Oklahoma State. I kept track of percentage of offensive plays that ended up being a rushing attempt as well as what the team’s top running back accomplished in that particular season during Miles’ tenure at Oklahoma State and LSU.

For comparison, I also looked at the same statistical categories for Kansas during this decade when the team has had multiple different head coaches.

Right away, the biggest thing that stood out was the run percentage. The Jayhawks have run the ball at least 58% of the time on three different occasions since 2010. A Miles-led team has done that 10 different times, including each of his previous six full seasons.

Since 2010, KU’s top running back has only eclipsed the 1,000-yard rushing mark three times. Miles, meanwhile, has had nine different campaigns — and four this decade — where his top running back ran for over 1,000 yards.

(Side note: If you remove 2006 from the pool, when Jacob Hester led the team with 94 carries, Miles’ top running back has averaged just over 203 carries per season.)

All of this is obviously good for sophomore running back Pooka Williams, who recently rejoined the team after a strong freshman campaign. Williams will serve a one-game suspension, but figures to be an important part of Kansas’ offense when he returns.

But this could also be a favorable system for running backs Khalil Herbert and Dom Williams as well. Both could see a significant uptick in carries if the Jayhawks run the ball more than last year’s mark of 35.2 rushing attempts per game.

Even offensive coordinator Les Koenning’s track record would suggest that will be the case.

Koenning’s most-recent stop was UAB in 2017, when the team ran the ball 60.7 percent of the time and Spencer Brown led the team with 1,329 yards on 250 carries. Koenning’s top rusher has averaged 184 attempts per season during his time at Alabama, Texas A&M, Mississippi State and UAB.

Sure, the Big 12 tends to be more pass-happy and more teams are utilizing a spread-style offense in today’s game. KU also won’t likely have the luxury of playing with the lead, which usually warrants more passing attempts.

But if the history of the new coaching staff is any indication — as well as the talent on the 2019 roster — then KU should expect a significant bump in the rushing production this fall.

Should be said, "The Jayhawks have run the ball" not have ran the ball. Pretty basic stuff Shane.

It's always so refreshing - -like a breath of spring fresh air to have someone who is always so quick to correct others - -just makes me tingly all over, - -Mercy must be awesome to be correct on all counts - - thanks you Soooo much for picking this up and bringing it to Shane's attention. - -you are just - - just - - just a Peach.

Gerry, there's nothing wrong with expecting professional writers to write professionally. Perhaps standards don't mean anything to you; to some of us, they do matter.

Being able to convert a few more 3rd downs to extend drives will go a long way towards increasing the number of carries and total yards, far less relevant to %. Having a Leonard Fournette would also help bump all those numbers. Getting some bigger WR would seem to help as well.

The RB group is arguably the strongest position group on the team other than the secondary so they should get the ball a lot. Miles and Koenning just need to be creative in getting them ball and getting them the ball in space.

Throwing it horizontally for zero yards and running it up the middle every down isn't the way to go (cough* Beaty).