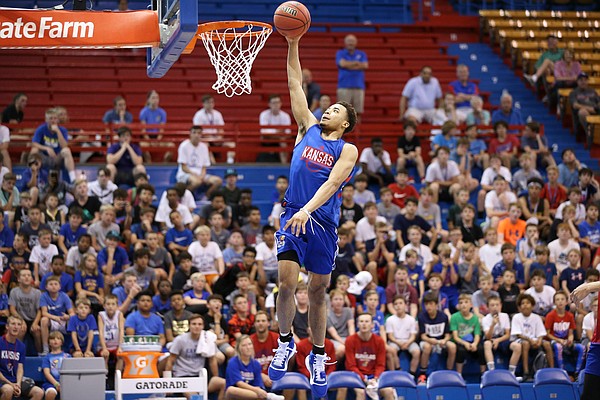 It is never too early to make predictions regarding the Kansas men’s basketball team. Forecasting the team’s leading scorer is something fans and reporters start doing before the previous season is even over.

The Jayhawks have plenty of production returning from last year’s team that finished third in the Big 12 conference before eventually falling to Auburn in the second round of the NCAA tournament. Kansas returns 55.2 percent of its minutes from a team that featured a talented group of freshmen.

Bart Torvik, who operates a website much like KenPom for analytical purposes, is one of the few prognosticators that already has his projections accessible to the public. His projections rank Kansas as the third-best team in the nation, trailing only Michigan State and Florida.

Perhaps the most interesting feature about Torvik’s website at this point in the offseason, though, is the fact he has a top-10 projected contributors for each team. As a result, I thought it would be fun to go over what he has projected for Kansas.

Before revealing his numbers, it is important to note that this is one system and it is constantly being updated this offseason. I’m sure different prognosticators, if they chose to have this feature, would have different results as well. Torvik even said on Twitter in late June that Kansas is hard for the algorithm to accurately project minutes.

That being said, it is only July and there is not much else going on. Why not get into Torvik’s statistical projections for the Jayhawks? 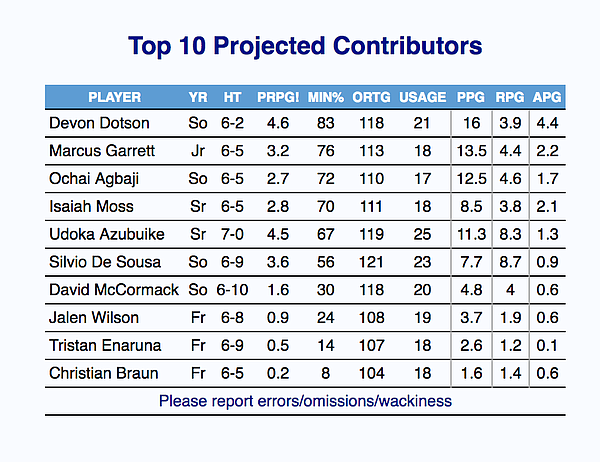 Before even looking at the numbers, Dotson might have been the pick to lead Kansas in scoring this upcoming season.

What Dotson did as a freshman point guard last year was incredible. Dotson, who started all 36 games, averaged 12.3 points, 3.7 rebounds and 3.5 assists per game while playing an average of 32.4 minutes per contest. Dotson was named to the All-Big 12 third team in his first collegiate season.

If Dotson can shoot better than 36.3% from long range, it is safe to assume he will take a big leap this year. Dotson flashed superb speed and an uncanny ability to get to the rim. Dotson made 61.3% of his 168 shots at the rim last year, which was a better clip than what Frank Mason III accomplished during his senior season when he converted 56% of his 191 attempts at the rim.

Dotson’s projections could be inflated given that Torvik’s algorithm does not include production from backup point guard Issac McBride. Still, Dotson as KU’s leading scorer would be my bet.

Look at that balance.

It is not a new concept for a Bill Self-led team, of course, especially one as talented and deep as this year’s roster appears to be. Last season, though, Dedric Lawson and Dotson accounted for nearly 42% of KU’s scoring.

Torvik’s projections suggest that Kansas will have more balance this season, which could be a problem for opposing teams. Marcus Garrett (13.5), Ochai Agbaji (12.5) and Udoka Azubuike (11.3) are all projected to average double figures along with Dotson.

Garrett’s offensive boost is especially noticeable, though that may be due to McBride’s absence. Garrett is projected to play 76% of the minutes, which is the second-highest clip on the team. While Garrett will certainly have to be on the court due to how much he can impact a game in other areas, some of those minutes are probably from him filling in at point guard.

Regardless, KU should have more balance this season and multiple players will have their opportunity to shine.

When Azubuike announced he was coming back for his senior year, it was no secret that he was going to be a big part of KU’s offense.

These projections support that theory, as Azubuike leads Kansas with a 25.0 usage rating. In late June, Torvik tweaked his projections algorithm to implement a minutes dampener for guys who foul a lot. That led to Azubuike’s minute percentage to be at 67%, which is fifth on the team.

Azubuike will be a focal point of KU’s attack when he’s on the floor. In fact, he registered a 28.2 usage rating in the nine games he played last year. It still remains to be seen if Azubuike can be as efficient if he’s ultimately given less minutes.

I'm sure Prison Mitch isn't going to be at the top of this list but a complete omission is weird . . .

That was weird to me as well. Since it is limited to top-10, I suppose it kept McBride and Lightfoot off the list. I would have guessed Enaruna and maybe Braun would have been the two. But I'm sure Lightfoot will have an impact this season.

Garrett won't even be close to KU's second leading scorer.

Hopefully, Garrett's O game has continued to improve, but I'd guess his ppg will be lower more because he knows even more how to facilitate for others.

Even though I'm the president of the Marcus Garrett fan club, I was surprised that he was second as well. I think it is important to remember how good he was at getting downhill before his ankle injury though. I wouldn't predict Garrett to be second on the team in scoring either, but I think he's capable of averaging close to double figures.

He already spent an entire summer working on his jumpshot. It got worse. I highly doubt he will ever improve.

Is McBride the back-up PG? I seem to recall Coach Self commenting in June (?) that he wasn't a PG. I think he made a similar comment about Frank when he was a freshman. He was a small shooting guard initially, but obviously developed as a leader/PG, though it was still really beneficial to have Devonte along side.

I assumed the reason they recruited the new guy - spacing name, from Columbia, was because they knew they needed a true PG. Sounds sort of like a Devon clone with better D.

It will be interesting to see who steps up this year. So many candidates with potential for double digit %, but would be a total 180 for Coach to go beyond a 9 man usage (even 9 is generous) by conference time. Lots of opps during non-con. Not so much once 2020 rolls around.

Last year seemed like an anomaly for players earning extra time sitting down. Ochai's redshirt removal was entirely based on the lack of production, early on in particular, by 2 of the 3 transfers. Seems more common for Coach to say, "I really should be playing him more. Gotta find a way to get him more minutes."

Definitely agree with Mitch having greater usage. He and Garrett just know how to do the right thing. Not as offensively gifted, or even spectacular in any way, but Mitch will be used though it's a really crowded frontline.

Where Mitch may become more valuable is when others go to small ball, especially when confronted with rest of the frontline. He would seem more capable than the others on D at chasing around the oppositions PF.

Dok has earned a reputation for being foul prone, but I seem to recall Coach commenting during his sophomore (?) year that they had noticed that he tended to pick up his fouls when they played him tired because of a lack of other post players. The projected minutes might be accurate, but I don't think it will be because of fouling.

David and Silvio both provided fully capable back up for Dok at the 5, and Mitch for Silvio (expecting SDS to start at the 4). Expecting the frontline to be really efficient this year. Hopefully on D defending the 3 as well as on O. That will be the real key. That or Jalen/Tristan/Marcus earn more minutes at the 4.

I thought Silvio was a Junior? They have listed as a Sophomore. Did last year not count towards his eligibility?

I think other players have been able to redshirt when they weren’t eligible so I’m assuming the same for him - not that it should matter.

Not when it's the NCAA that rules you ineligible...in that case the year is gone. The only one who could get a year back on this team is Doke because he's missed more than half of each of the last two years. Not that anyone expects him to try to get a 5th year but his age (he's only 19) means it wouldn't be the end of the world if he was "done" by 21. Still younger than many seniors.

1st and 3rd year. He played most of his second year.

If Marcus gets 10 a game, they should throw a ticker tape parade down Massachusetts!!