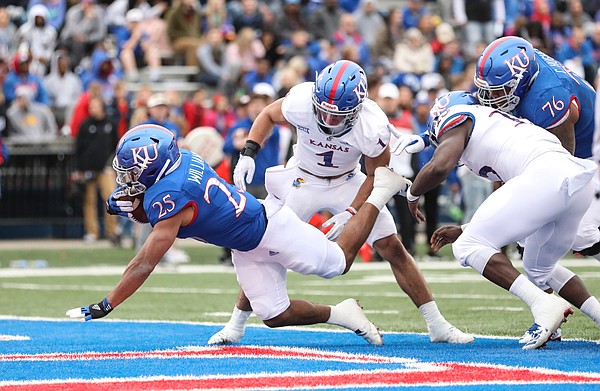 Blue team running back Dom Williams falls into the end zone for a touchdown during Late Night Under the Lights on Saturday, April, 13, 2019 at Memorial Stadium. by Nick Krug

It won’t be much longer before the college football season is finally here.

I know this because the Big 12 conference released its preseason poll today, and Big 12 Media Days will take place next week. But also more betting information has become available as of late, which is always interesting to look at.

Last week, over/under win totals were released on FanDuel for most FBS teams.

For now, though, let’s breakdown the 10-team conference that the Kansas football program belongs to.

I'll also offer up a few of my key takeaways, which includes the team with a line that's too good to pass up.

Odds to win Big 12 title — Via BetOnline.ag as of Wednesday afternoon

KU is beyond a long shot

Let’s start with the obvious, Kansas was always going to be last on this list. On Wednesday, the league announced that the Jayhawks were voted last in this year’s preseason poll. It marks the ninth season in a row that KU has been voted at the bottom of the conference by the media.

Kansas is also dead last among Big 12 teams in win totals, as the team has an over/under of three victories for the 2019 season. All nine other squads in the league have an over/under of at least five victories, according to FanDuel’s online sportsbook.

That being said, it is surprising to see that large of a gap between KU and Kansas State. Both programs have new coaches at the helm, and last year’s Sunflower Showdown came down to the wire in an eventual 21-17 win by the Wildcats in Manhattan.

K-State also was the lowest scoring offense in the league last year, which marked the first time this decade that KU did not hold that title. It is not that I believe KU is better than Kansas State this year, but I do believe the gap is closer than these odds would indicate. As a result, I'd say the Jayhawks are a better bet than the Wildcats.

But don’t put money down on either. Please gamble responsibly.

Stay away from West Virginia

Neither in-state school is the worst bet, however. West Virginia having the third-highest odds among these 10 teams does not make sense to me whatsoever. In fact, the Mountaineers are much closer to the bottom tier of the league than they are a title contender.

Last season, WVU came so close to playing for the Big 12 title game, but this year’s team is nowhere near that level at this point. The Mountaineers not only have to replace Will Grier at quarterback, but they are installing a whole new system under Neal Brown, who went 4-9 in his first year Troy.

West Virginia has the second-lowest win total (5.0), so there is no reason this team should have the same odds to win a league crown as Iowa State.

It is tough to bet against Oklahoma or even Texas, but TCU’s odds are rather intriguing. The Horned Frogs are coming off a 7-6 campaign, but were decimated with injuries last fall.

In addition, recent history would suggest they are primed for a bounce back. Following a 6-7 clip in 2016, Gary Patterson led TCU to an 11-win season. After going 4-8 in 2013, the Horned Frogs responded with a 12-1 record en route to a win in the Peach Bowl during the 2014 campaign.

Early win totals would suggest that TCU will be in the thick of it this year, and the program was just voted fourth in the preseason poll. In fact, the last two times the Horned Frogs were picked fourth or lower was 2014 and 2017. They won a Big 12 Championship in the former and played in the Big 12 Championship Game in the latter.

Keep in mind that you are currently getting 18/1 odds on the Horned Frogs. It is hard to find something better than that, and I'm more than willing to take my chances on Patterson and that TCU defense.

Well written, Shane; it all seems logical to me.

If were ever inclined to bet against KU, it might be worth putting $80 up to win a buck -- that is, if that option were available.