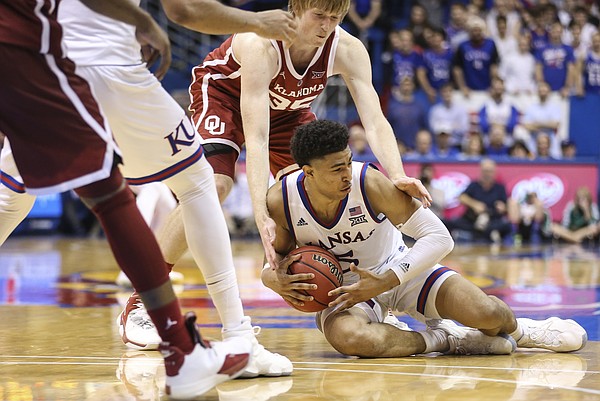 Kansas guard Quentin Grimes (5) recovers a ball after losing it on the dribble during the second half, Wednesday, Jan. 2, 2019 at Allen Fieldhouse. by Nick Krug

Some people made their 2019 resolution to go to the gym more or to drink less soda.

I clearly don’t care about my health, but I do care about providing coverage for the loyal readers of KUsports.com. So with the start of the new year, and the start of a new Big 12 season, I have decided to introduce a new blog.

As always, feel free to reach out to offer suggestions along the way. I’m really making this up as I go.

With that being said, let’s dive into the first such post of three-point play, which begins with how a struggling freshman made his best play of the season in the final minutes of KU’s 70-63 win over Oklahoma Wednesday night at Allen Fieldhouse.

But only after he made a costly error first.

Oklahoma used a 9-2 run to trim the deficit to just six points with less than three minutes to go.

Kansas turned to chop, and freshman Quentin Grimes eventually got the ball on the right wing and saw an opening. Grimes charged through the Sooner defense with his left hand before the ball was poked away from a trailing defender.

Rather than give up, though, Grimes immediately poked the ball loose from OU near the left block. The ball rolled to the top of the key, and Grimes slid through two different Oklahoma players to jump on the loose ball.

To top it off, Grimes found fellow freshman Devon Dotson from the floor. Dotson then attacked the rim before the Sooners could recover, finishing a tough layup through traffic to take an eight-point lead with 2:35 left in the game.

On the broadcast, color analyst Fran Fraschilla lauded Grimes for his effort and admitted that OU coach Lon Kruger would use that sequence in the film room.

“Quentin Grimes made that play because of his hustle,” Fraschilla said. “When you show the film tomorrow in that Oklahoma film room, you have to tell your guys, ’If we are going to win in this arena, you have to sell out completely.’”

“That was the best play he’s made all year,” KU coach Bill Self said. “The reason it was a great play was because he turned it over and got it back. You guys remember Russell Robinson. Whenever he turned it over, that was when he was most dangerous.”

More than that, though, the play demonstrated the growth of Grimes.

It has been a lackluster start to his freshman campaign for the perceived lottery pick in the 2019 NBA draft. Grimes has struggled with confidence, and has been placed on the bench in key moments of multiples games.

Grimes scored 14 points in the Big 12 opener, which marked his second consecutive double-digit outing after scoring 16 points against Eastern Michigan. He appears more comfortable than he’s ever been this season.

And even when he does make a mistake, Grimes has shown the composure to keep playing.

“It goes from them being in transition with a chance to score in numbers to us getting an and-one,” Self said. “It could have been a five-point swing on just that one play. It was a great play.”

KU sophomore Marcus Garrett made just one shot from the floor, but he had a significant impact as a facilitator.

With Dotson in foul trouble, Garrett was forced to serve as backup point guard during a stretch in the second half. Dotson ultimately finished with five assists, which matched his season-high. He also only committed one turnover against OU’s strong defense.

But the highlight of the game for Garrett occurred with over nine minutes left in the contest. Junior Dedric Lawson threaded a pass to Garrett in the lane. Garrett wasted no time, flinging a kick-out pass to Dotson on the left corner.

“He made the best pass of the game,” Self said.

The criticism for Garrett’s shooting ability is absolutely fair, especially on nights like Wednesday. But Garrett continues to prove he can contribute even when his shot isn’t falling.

Even before Udoka Azubuike went down with an ankle injury in early December, there was a certain clunkiness to the two-big lineup. It is why I thought the injury was the biggest concern regarding this team, because Lawson and Azubuike needed to work on playing together ahead of conference play.

Fast forward to the start of Big 12 play, and fans are seeing exactly that. It is clear that Azubuike is the go-to option when he’s on the floor, and he’s certainly the toughest matchup for an opposing team. It is also evident that Lawson thrives when he’s the big man, and has space to go to work inside.

Clinging to a 49-44 lead, Self turned to the latter lineup with Lawson at the five. Senior Lagerald Vick, Garrett, Grimes and Dotson were also on the floor with him. On the first possession, which came after a timeout, Kansas got an angle on the left side and Grimes immediately lobbed a pass inside to Lawson, who netted the layup.

Lawson posted up Oklahoma’s Brady Manek on the second possession before turning around hitting a jumper in Manek’s face.

The third possession was the Dotson triple, which Lawson deserved at least a hockey assist on. On the fourth trip, Lawson didn’t need anyone to feed him the rock. He went the length of the floor to finish on the other end to stretch KU’s lead to double digits.

Kruger called a timeout to take Manek out of the game, but the damage had been done.

It remains to be seen if the two Kansas posts will learn to play together, though I think it will look much better next month. At the very least, KU has shown the ability to use different combinations depending on the matchup.

And that is a luxury that Self didn’t have last year.

This is great stuff. I look forward to more in this new feature. Thanks, Shane!

Thanks, Matt. Appreciate it!