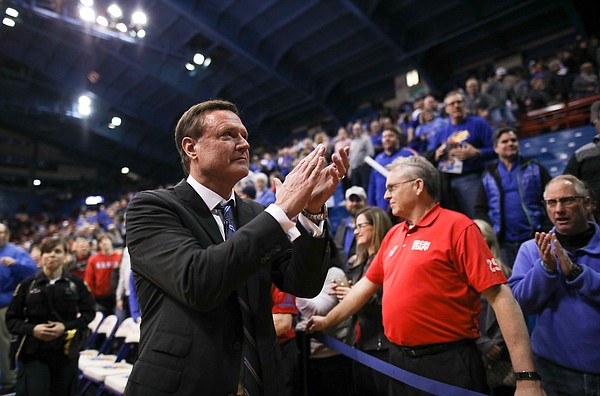 After a total of 60 minutes of action, Kansas coach Bill Self had seen enough.

Through three halves, Iowa State obliterated KU with ball screens to get open looks. It led to a 77-60 win over the Jayhawks in the first meeting on Jan. 5, which marked the highest scoring output by the Cyclones in Big 12 play.

ISU was poised to do even better in the rematch, scoring 42 points in the first half Monday night in Allen Fieldhouse. It marked the most points Kansas has allowed in the first half during league play this season.

But a defensive adjustment by Self helped Kansas secure a crucial 80-76 win, which could end up carrying a lot of weight by the end of the conference season. Self knew a second-half adjustment was necessary, and he even told ESPN sideline reporter Holly Rowe as much during the halftime interview.

“They did some ball-screen stuff that is bothering us,” Self said. “We have to do a better job of keeping the ball in front of us and, of course, getting to their shooters.”

Rowe’s follow-up was about how Self plans to fix the ball-screen defense. Self, of course, did not tip his hand at the time. Still, KU’s second-half adjustment on ball screens proved to be a difference maker, and it will be the first thing I focus on during the latest edition of three-point play.

As mentioned in previous three-point play posts, opposing teams tend to get more open 3-pointers due to Self’s defensive philosophy.

The Jayhawks (16-3, 5-2 Big 12) will use a help defender in pick-and-roll situations, which led to a bunch of 3-pointers for the Cyclones. Iowa State (14-5, 4-3) hit a total of 19 3-pointers in the 60 minutes that Kansas used this defensive scheme, including 13 3-pointers in the first meeting at Hilton Coliseum.

In the second half, Self told the team to switch everything on ball screens. The only time he didn’t want that to be the case was when KU freshman Devon Dotson was on ISU’s Nick Weiler-Babb.

As much as Kansas does deserve credit for making this switch, it wasn’t always perfect either. Early in the second half, Weiler-Babb called a screen and got Dedric Lawson to switch on him. Weiler-Babb drilled one of his two 3-pointers for the game, and you can tell that Dotson knew his teammate made a mistake.

But the game really turned when the Jayhawks started executing the second-half adjustment.

During the team’s decisive 14-0 run, KU’s defense was locked in and switching everything effectively. Dotson continued to be all over Weiler-Babb, disrupting the flow of the entire ISU offense in the process.

When it worked, it was obvious. And Iowa State coach Steve Prohm admitted that after the game.

Perhaps the best plays of Lawson’s 29-point, 15-rebound performance came on the few instances he wasn’t filling up a stat sheet.

In the first meeting with Iowa State, the usually-reliable Dedric Lawson was flustered. Iowa State prevented him from touching the ball in the paint, and hit him with a double-team when he managed to do so. Lawson finished with a season-high six turnovers in the loss.

The Cyclones weren’t as effective at limiting his touches, and he managed to make the right play when he sensed a double-team was coming.

At the 7:19 mark in the first half, Lawson kicked the ball out to freshman Ochai Agabji for a 3-pointer.

Now, Lawson was credited with his lone assist on this play, but he made multiple plays like this that didn’t always lead to a bucket. In addition, he had impressive seal at the the 10:59 mark in the first half, which got an easy layup for sophomore Marcus Garrett.

It was those type of plays that really stood out to me on a night where Lawson essentially did it all.

A pair of plays in the final 77 seconds of the first half are worth taking notice of, even if it did not lead to a bucket in either scenario.

With about 1:17 left in the first half, Dotson found himself in an unfavorable situation. Dotson, who was excellent as a perimeter defender all night, got switched on a big man with a ball screen. The Cyclones tried to take advantage, threading a pass to Michael Jacobson on the block.

Jacobson, who is 6-foot-9, should have easily got a good shot over a 6-foot-2 Dotson. Instead, he brought the ball down for a second, and Dotson forced a jump ball immediately.

Moments later, Lawson did some dirty work to steal another possession back for Kansas.

Lawson, who already had one foul, managed to draw a charge late in the first half. He deserves a ton of credit for taking that kind of risk, knowing how important he is to KU's success on the offensive end.

Without Udoka Azubuike, the Jayhawks don’t really have a rim protector and need to find some way to deter teams from attacking the rim with ease. Moments like these two plays are an example of how KU can play to try to gain an extra possession every now and then.

Lawson did take a charge in that last GIF. It wasn't a block.

Yep, you can even see the ref signalling the charge call. The announcers gave him credit for taking the charge late in the first with 1 foul.

Being able to change up defenses is big. Give Coach Self credit, that was a decisive change. We are helped by the fact that Iowa St does not really have a post presence, only a forward.

In fact, if you look around the league, it is mostly forwards and guards.