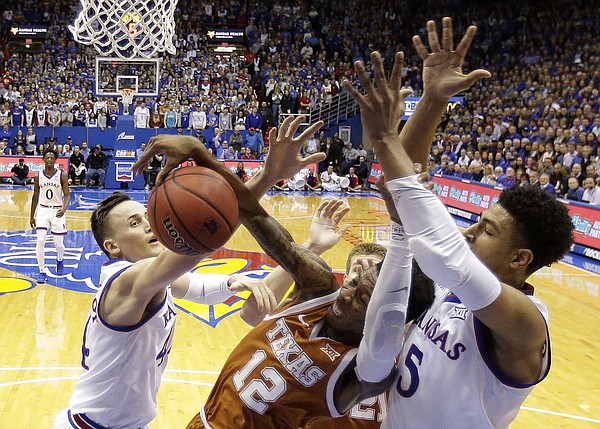 Following a two-point win, it can be far too easy to focus on a specific possession as the deciding factor of the outcome.

Perhaps if Texas had more spacing on the final play of the game, the visitors are able to get off a better shot in an eventual 80-78 loss to Kansas Monday night at Allen Fieldhouse. Maybe No. 7 Kansas breaks the game open earlier, if not for a missed shot or breakdown on the defensive end.

The beauty of this blog is that I get to focus on three specific plays that stood out to me, and I start this week with one possession that I believe could have changed the outcome of the game. Sure, it was only a missed dunk by the Longhorns, which ultimately equaled the final point difference between the two teams.

However, it was a play that made KU coach Bill Self vividly upset heading into the intermission. And it was worth highlighting to begin the latest edition of three-point play.

Why Bill Self was so angry at halftime

Self shouldn’t have been as upset on his way to the locker room at halftime.

KU held the ball for the final shot of the first half — or so it thought. With the clock winding down, freshman Devon Dotson started to run the play. It got senior Lagerald Vick a good look from the baseline against the Longhorns’ zone defense with about seven seconds remaining, even though the play clock and the shot clock were separated by a second.

Vick’s 3-pointer fell through the net with five seconds remaining, and Texas wasted no time. Jase Febres, who missed the game-winning attempt in the second half, sprinted toward the other end and called for the ball.

Febres was ahead of every Jayhawk, and went for the decisive blow. Instead, Febres missed the dunk attempt, but that didn’t stop Self from screaming at Dotson on the court.

Self knew his team got lucky in that instance. Dotson should have been the first one back on defense. Vick didn’t sprint until the ball was in Febres’ hands, though it was already too late. And nobody even entertained the idea of stopping the ball.

After the game, Self acknowledged that his team failed to learn from this mistake on a crucial possession in the final minute of the contest.

Lawson missed his second free throw attempt with 13 seconds left that would have put the Jayhawks up five points. Once again, Texas wasted no time after collecting the defensive rebound and got an open look on the other end in a matter of seconds.

KU failed to get back on defense in time, and Courtney Ramey drilled a 3-pointer to trim the deficit to a 79-78 margin.

"I saw total lack of focus, IQ, whatever you want to call it," Self said. "I always like putting two guys up, because we are used to shooting them with two guys up. You don't go for the rebound, you just get back."

"That was just a really bad play," Self said. "It almost cost us the game."

The two defensive lapses were likely a factor in Self calling a timeout on the game’s final possession, which allowed Texas coach Shaka Smart to draw something up despite not having a timeout.

Self, though, needed to make sure his players knew what they were doing on the defensive end.

Despite being down 10 with five minutes remaining, Texas surged back behind a plethora of triples.

The Longhorns hit four 3-pointers in the final five minutes, which was largely due to their emphasis on high-ball screens with freshman Jaxson Hayes. Entering Monday, Hayes had recorded a dunk on 43 of his 65 made field goals.

Hayes plays above the rim and is lethal in pick-and-roll situations, such as this one with 4:49 left in the game.

The Jayhawks were forced to hedge over with their help defenders, and this allowed the Longhorns to get favorable looks along the perimeter.

Entering the Big Monday tilt, Texas was hitting just 32.4 percent of its shots from long range, which is 240th in all of college basketball. But it was clear that this was a point of emphasis against Kansas, particularly when Hayes was in the game.

"Our guys did a good job of passing the ball off our pick-and-rolls," Smart said. "We tried to put our shooters in spots where if the guard could deliver the ball then they would get an open shot."

Jayhawks take care of the rock

The last point will be a positive one, since KU did win this game after all.

It seems like another lifetime ago that the Jayhawks committed a season-high 24 turnovers in a 17-point loss at Iowa State. They have won three games since then, two of which have been at home. Over that span, KU has turned the ball over a total of 30 times.

During the win over Texas, Kansas coughed up just four turnovers. The Jayhawks turned it over on 6.0 percent of their possessions, which marked their lowest turnover rate of the season by nearly 4.0 percent.

KU didn’t commit its first turnover until the 17:42 mark in the second half. Analyst Fran Fraschilla cited the guard-heavy lineups as the reason for the low turnover numbers by both squads.

But that’s not entirely true. The Jayhawks strictly used a four-guard lineup against the Cyclones. It was a combination of things, though the smaller lineup certainly helps.

Lawson was better at passing out of a double-team. KU wasn’t fazed by the random zone or press looks that Texas tried to throw its way. And Vick, who had been struggling with errant passes in the past few games, was making better decisions in designed sets.

It's ridiculous how bad our perimeter defense was last night. A team that entered the game shooting 32% from three to hit 38.2%, with 13 makes in 34 attempts. Especially in the first half, we made Texas look like the Golden State Warriors.

This "Three-Point Play Blog" is awesome, keep up the good work Shane Jackson!!!

Thanks so much. That means a lot. Appreciate you reading.