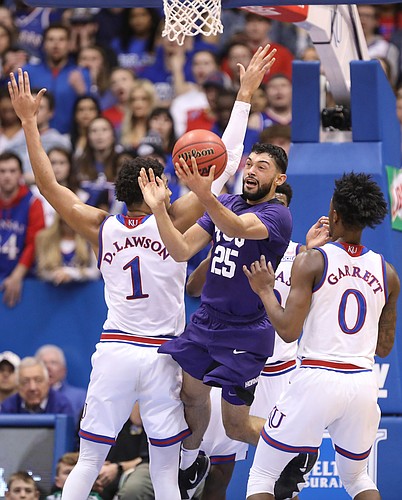 TCU guard Alex Robinson (25) tosses a shot over his head after running out of options against Kansas forward Dedric Lawson (1) and Kansas guard Marcus Garrett (0) during the first half, Wednesday, Jan. 9, 2019 at Allen Fieldhouse. by Nick Krug

Kansas sophomore Marcus Garrett is up for the task of guarding anyone on any given night.

Garrett’s combination of length and athleticism allows him to defend just about any position on the floor. Garrett is more than capable of hanging with stretch forwards, and he can be overwhelming against opposing guards.

But there is one player that Garrett doesn’t actively seek to defend. Garrett is not a fan of trying to guard Dedric Lawson.

“Oh yeah I get a chance to guard him in practice. But I’m not going for him,” Garrett said.

The reason? Lawson can be deceptive, even for a distinguished defender like Garrett.

“A lot of people think he’s slow,” Garrett said. “But when you actually get out there and guard him you see how quick his first step and spin move, all that is.”

Fortunately for Garrett, he gets the opportunity to be on the same side as Lawson in the games that matter. The latest of which occurred Wednesday night, when Lawson scored 31 points to lead KU to a 77-68 win over TCU in Allen Fieldhouse.

But fortunately for the Jayhawks, Garrett appears to be up for the task of defending anyone else in the Big 12. And he’s become potent on that end for Kansas, which improved to 13-2 (2-1 Big 12) after last night’s win.

Due to foul trouble, Garrett was asked to defend TCU point guard Alex Robinson for an extended stretch late in the first half.

Garrett kept Robinson out of rhythm, which halted the flow of the Horned Frogs’ offense. Entering Wednesday, Robinson was second in the nation with 8.7 assists per game. Robinson registered just four against KU.

“I know how good of a passer he is and how he’s like a pro when he gets by his man,” Garrett said. “I was basically just trying to keep him in front with high hands to try and make him make a lot of passes.”

At first, starting point guard Devon Dotson earned the assignment of defending Robinson. He picked up a pair of early fouls, and sat for much of the final 10-plus minutes. Not long after, Garrett assumed the role as the team’s point guard.

He started things off with an alley-oop to freshman Quentin Grimes in transition.

“I’m very comfortable in that role,” Garrett said. “It is the only role I have played my whole life. I feel very good playing point guard.”

The very next defensive possession is when Garrett took on the responsibility of keeping Robinson in check.

Over the final nine minutes, Garrett rarely left Robinson on the defensive end. It was evident that Robinson, who is 6-foot-1, was bothered by Garrett’s size. On this play, Garrett’s arms prevented Robinson from seeing an angle to make a pass.

“He’s just so good with the ball,” Garrett said. “He’s going slow and then he can change speeds.”

Garrett also picked up Robinson sooner than most of the other defenders. Garrett almost always started guarding Robinson near half court, forcing the Horned Frogs to bring out screeners father away from the basket.

Garrett even sprinkled in some full-court man defense every now and then to make Robinson work harder to set up an offense.

“I think he’s smarter (than other guards),” Garrett said. “With him being a senior, he knows how to pick spots.”

When Garrett was switched off Robinson, he was quick to provide help defense to keep Robinson from getting in the lane.

The entire Kansas defense emphasized keeping Robinson out of the lane, as he has a knack for finding the open man when opposing defenders help over.

Yet, it was just the latest example of Garrett’s versatility as a defender.

Last month, Garrett was sticking with Villanova’s 6-foot-6 forward Eric Paschall, who can stretch the floor with his ability to shoot from long range. Last night’s win proved Garrett can also shutdown a quick facilitator to help halt an entire offense, even if the plan wasn’t originally for him to guard Robinson.

And that’s a byproduct of Garrett’s ability to understand each opponent before every game.

“I just stick to the scouting report,” Garrett said. “Most of the time, I be watching Big 12 games. I just look at what guards like to do and what bigs like to do when they catch the ball.”

If he could shoot a lick he'd be a really good player.

His FT% has increased significantly (15%) from last year, so there's obviously improvement possible and in the process.

Fortunately, he's also smart enough to know he's supposed to facilitate the other scorers we do have and limits his shot attempts. I doubt there are many times Coach sticks his head in his hands filled with the "Why is he taking that shot?" thoughts.

He is a really good player NOW. He contributes without shooting. If he could shoot, he would be in The League.

You got that right!

Basically he throws the ball to the rim rather than shooting. Compare when he shoot free throws to when he shoots field goals. Maybe he throws because he doesn't have time or is guarded. Similar problem with Udoka shooting free throws shooting is different than throwing Example You throw the ball from midcourt

Does the team or someone else track shot clock violations? There seemed to be more than normal last night. It would be great if the team was developing that personality. Not sure if it correlates with Garrett defending the 1, or maybe I just haven't been paying attention enough in previous games.